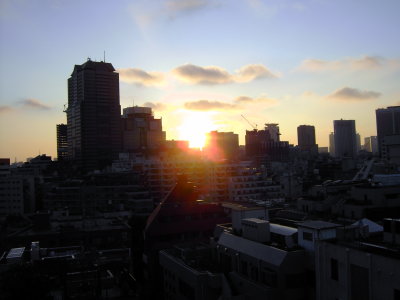 A fellow once sat up all night wondering where the sunshine comes from….

Finally, it dawned on him.

PUNS – we swear they make the world spin counter-clockwise. We absolutely love to hear that groan…. Here are three that will have your colleagues and friends looking sideways.

#1 – A marine biologist developed a race of genetically engineered dolphins that could live forever if they were fed a steady diet of seagulls. One day his supply of birds ran out, so he had to go out and trap some more. On the way back, he spied two lions asleep on the road. Afraid to wake them, he gingerly stepped over them. Immediately, the biologist was arrested and charged with transporting gulls across sedate lions for immortal porpoises.

#2 – An Inuit out hunting seals in his boat found that his feet were beginning to freeze. Carefully shaving off little strips of wood from the frame he was able to get enough fuel to start a small fire by his feet. Unfortunately the hide covering of the boat caught on fire as well and his entire craft was consumed by flames. This goes to prove that you can’t have your kayak and heat it too.

#3 – A man rushed into the doctor’s office and shouted, “Doctor! I think I’m shrinking!!” The doctor calmly responded, “Now, settle down. You’ll just have to be a little patient.”

1 thought on “Really, there’s nothing like a good pun”