By George is continuing its Christmas postings, presenting another 10 facts about this season that you may have not realized. 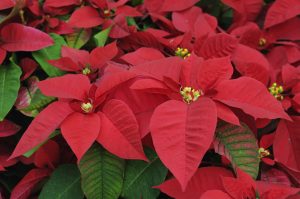 21. Jesus Christ, son of Mary, was born in a cave, not in a wooden stable. Caves were used to keep animals in because of the intense heat. A large church is now built over the cave, and people can go down inside the cave. The carpenters of Jesus’ day were really stone cutters. Wood was not used as widely as it is today. So whenever you see a Christmas nativity scene with a wooden stable — that’s the “American” version, not the Biblical one.

22. The abbreviation of Xmas for Christmas is not irreligious. The first letter of the word Christ in Greek is chi, which is identical to our X. Xmas was originally an ecclesiastical abbreviation that was used in tables and charts.

23. Myrrh is an aromatic gum resin which oozes from gashes cut in the bark of a small desert tree known as Commifera Myrrha or the dindin tree. The myrrh hardens into tear-dropped shaped chunks and is then powdered or made into ointments or perfumes. This tree is about 5-15 feet tall and 1 foot in diameter. Legend says Caspar brought the gift of myrrh from Europe or Tarsus and placed it before the Christ Child. Myrrh was an extremely valuable commodity during biblical times and was imported from India and Arabia.

24. The poinsettia, traditionally an American Christmas flower, originally grew in Mexico; where it was known as the “Flower of the Holy Night.” It was first brought to America by Joel Poinsett in 1829.

25. Long before it was used as a “kiss encourager” during the Christmas season, mistletoe had long been considered to have magic powers by Celtic and Teutonic peoples. It was said to have the ability to heal wounds and increase fertility. Celts hung mistletoe in their homes in order to bring themselves good luck and ward off evil spirits.

26. The modern Christmas custom of displaying a wreath on the front door of one’s house, is borrowed from ancient Rome’s New Year’s celebrations. Romans wished each other “good health” by exchanging branches of evergreens. They called these gifts strenae after Strenia, the goddess of health. It became the custom to bend these branches into a ring and display them on doorways.

27. The northern European custom of the candlelit Christmas tree is derived from the belief that it sheltered woodland spirits when other trees lost their leaves during winter.

28. Originally, Christmas decorations were home-made paper flowers, or apples, biscuits, and sweets. The earliest decorations to be bought came from Nuremburg in Germany, a city famous for the manufacture of toys. Lauscha in Germany is famous for its glass ornaments. In 1880, America discovered Lauscha and F.W. Woolworth went there and bought a few glass Christmas tree ornaments. Within a day he had sold out so next year he bought more and within a week they, too, had sold. The year after that be bought 200,000 Lauscha ornaments. During the First World War supplies of ornaments from Lauscha ceased, so American manufacturers began to make their own ornaments, developing new techniques that allowed them to turn out as many ornaments in a minute as could be made in a whole day at Lauscha.

30. In an effort to solicit cash to pay for a charity Christmas dinner in 1891, a large crabpot was set down on a San Francisco street, becoming the first Salvation Army collection kettle.