By George presents yet another 10 facts about this Christmas Season that you may have not realized. 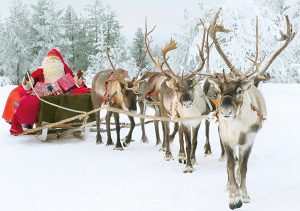 31. In the Thomas Nast cartoon that first depicted Santa Claus with a sleigh and reindeer, he was delivering Christmas gifts to soldiers fighting in the U.S. Civil War. The cartoon, entitled “Santa Claus in Camp,” appeared in Harper’s Weekly on January 3, 1863.

33. The Christmas turkey first appeared on English tables in the 16th century, but didn’t immediately replace the traditional fare of goose, beef or boar’s head in the rich households. (Today, it is estimated that 400,000 people become sick each year from eating tainted Christmas leftovers.)

34. Silent Night was written in 1818, by an Austrian priest Joseph Mohr. He was told the day before Christmas that the church organ was broken and would not be prepared in time for Christmas Eve. He was saddened by this and could not think of Christmas without music, so he wanted to write a carol that could be sung by choir to guitar music. He sat down and wrote three stanzas. Later that night the people in the little Austrian Church sang “Stille Nacht” for the first time.

35. The popular Christmas song “Jingle Bells” was composed in 1857 by James Pierpont, and was originally called “One-Horse Open Sleigh.”

36. The poem commonly referred to as “The Night Before Christmas” was originally titled “A Visit From Saint Nicholas.” This poem was written by Clement Moore for his children and some guests, one of whom anonymously sent the poem to a New York newspaper for publication.

37. In 1947, Toys for Tots started making the holidays a little happier for children by organizing its first Christmas toy drive for needy youngsters.

38. In 1996, Christmas caroling was banned at two major malls in Pensacola, Florida. Apparently, shoppers and merchants complained the carolers were too loud and took up too much space.

39. The U.S. Postal Service delivered a total of 19 billion cards, letters and packages between Thanksgiving and Christmas last year. The busiest delivery day was December 17, with more than twice as many cards and letters being processed that day compared to any other given day.

40. The day after Christmas, December 26, is known as Boxing Day. It is also the holy day called The Feast of St. Stephen. Some believe the feast was named for St. Stephen, a 9th century Swedish missionary, the patron saint of horses. Neither Boxing Day or St. Stephen have anything to do with Sweden or with horses. The Stephen for whom the day is named is the one in the Bible (Acts 6-8) who was the first Christian to be martyred for his faith.