This year, the Ottawa Valley can boast having the 2020 Tart Queen (as well as the runner-up queen).  Derek Dunn reports in an Arnprior Chronicle-Guide news article of February 24, 2020.

“Two bakers from just outside Arnprior have won first and second place in the butter tart category at a convention in Toronto.

“Marilyn Misener and her friend Nordella Zimmerling of McNab/Braeside township took home the top ribbon and runner up, respectively, at the Ontario Association of Agricultural Society gala. Misener won the right to submit at the provincial level after winning at the Carp Fair; Zimmerling won at Arnprior’s….

“Judges at the convention blind tasted from the association’s 200 submissions before declaring the winners. They evaluated appearance, including crust and filling, texture, even the folds (preferably none) in the pastry.

Here is the key take away from this story of success.

“The two are on the same side on the eternal debate between including or excluding raisins. No raisins!” both said, vehemently.” 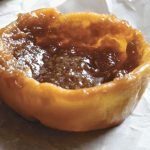