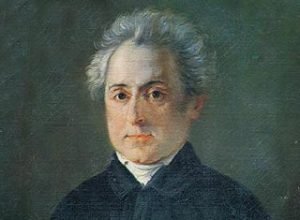 Dionysios Solomos is commonly referred to as the “national poet” of Greece. He is best known for writing the inspirational Hymn to Liberty that recounts Hellenes dream of freedom.

In 1863 he wrote this poem of the bloody beginnings of the war, the patriots’ Christian character, and of the struggle.

The poem is a significant legacy of the War of Greek Independence. Nikolaos Mantzaros put the first two stanzas of the verse to music in 1828 and, decades later in 1865, this war-time ballad became the Greek national anthem.

Here is a rough translation of the leading stanzas of the verse.

From the sacred bones,
of the Hellenes arisen,

and valiant again as you once were,
Hail, o hail, Liberty!

and valiant again as you once were,
Hail, o hail, Liberty!

Here is a rendition of the Greek National Anthem.

In 1918 poet Rudyard Kipling translated the ballad to become familiar to English speaking peoples around the world.

For more information from Wikipedia: