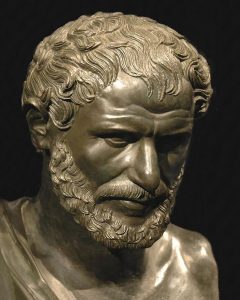 Heraclitus is an ancient Greek pre-Socratic philosopher from the 5th century BC.  Little is known of his life but he has been described as a misanthrope who was subject to melancholia – and he gained the title of the weeping philosopher. The central theme of Heraclitus’s philosophy is that the world as constantly in flux, changing as it remained the same.