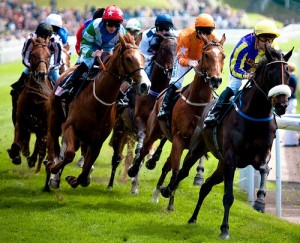 As we pass the mid-way mark of the first week of the 2011 federal election campaign, the horse race has heated up. So early on and the ponies are frothing and the stakes have seemed to already doubled.

From the earliest polls, the Conservatives have bolted from the gates ahead of the pack.  Here are the early calls:

(Interestingly, the Nanos poll also revealed the undecided at 21.7%.)

Already this is serious stuff. If the Conservatives cannot expand their lead through the course and the horses cross the finish line in their current pattern, Canadians will have a messy minority situation.

With current positions, there will be no post-race celebration. In this Run for Sussex Drive, it appears that should the Conservatives not win their coveted majority, they will be unseated by a left-of-centre-separatist-supported coalition. Hence, the early “fear mongering” rhetoric from the Conservatives about what it might mean to have a two-headed horse with a separatist a—hole stumble across the line and into the winner’s circle.

(If the race results weren’t so damn serious for our Nation, this trot through the next few weeks would be very entertaining!)

NOTE:  Daily updates on the latest polling results can be found at:  http://www.nanosresearch.com/main.asp

Saddle up! It’s going to be quite a ride!