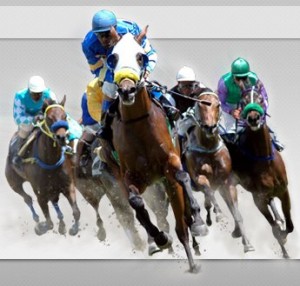 Entering into the backstretch, it’s no longer about winning the Run for Sussex Drive.  For the Prime Minister, it’s about winning decisively – lengths ahead of the other ponies.

In a candid response to reporters this week, PM Harper repeated his claim that being first past the post will not be enough. The Conservatives needed a majority is he is to enjoy the winner’s circle for any length of time.

… Mr. Harper appears to genuinely believe that he has little hope of staying on as Prime Minister unless he wins a majority. “If the people of Canada were to give our government another minority mandate, we’d be honoured to accept it,” he responded, when asked why he didn’t believe another Conservative minority government was possible. But “I don’t think that’s in the cards. I think if we win a minority, all the signals are clear the other three parties are going to get together in some form” to replace the Conservatives, he said.

So the question is whether there’s enough of a kick in the Conservatives’ stride in the last two weeks of the campaign. Can Harper put the necessary distance between him and the rest of the field?

For the Conservatives, it’ll be a race to the finish…