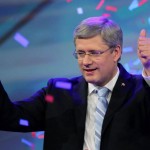 C’est ca.  Now, consider the remarks made by Prime Minister Stephen Harper once the reality of these election results sunk in for him and his Conservative team. In post-election interviews, the PM has given us a glimpse of how he views his responsibility through the next four – five years:

“We are intensely aware that we are and must be the government of all Canadians, including those that did not vote for us.”

“We got that mandate because of the way we have governed, because of our record…. Canadians expect us to continue to move forward in the same way, to be true to the platform we’ve run on and be true to the kind of values and policies we’ve laid out before them.”

Mr. Harper also intimated that he feels the burden of Canadians’ trust and their vote for a majority government:  “It feels great but at the same time I am very much aware of the immense challenges that lie before us in the government and the responsibility that this office carries with it.”

This is all refreshing that we have a Prime Minister with these reflections after having been handed the keys to absolute power in the Nation’s Capital.  Furthermore, the fact that he immediately jetted back to Ottawa and is back in his office today to attend to the country’s matters speaks volumes for the type of man he is. (Most elected representatives and candidates are cacooning themselves with their families and friends and putting their feet up from their grueling campaign schedules – but not Stephen Harper.)

Let us take this point one step further in saying that PM Harper’s immediate response to the Canadian public is both refreshing and reassuring. Can you remember hearing this type of comment from previous PMs in the wake of their majority mandates? We did not hear it from PMs Chretien or Mulroney – and, in fact, we heard the exact opposite – an arrogant bravado about the dawn of a new Liberal era – from former PM Trudeau. So, given this comparison, we are ever-hopeful our current PM’s observations are a sign of many good things to come…

So, By George Journal will complete our 2011 federal election commentary with a final fractured poem (and note we’ve moved to sailing analogies from flogging that horserace analogy):

calming waters, edging to the right