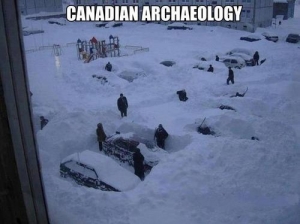 Q: What do you call a sophisticated American?/ A: Canadian.

Q: What are the two seasons of weather in Canada? / A: Six months of winter and six months of poor snowmobiling.

Q: What does a Canadian say when you step on his foot? / A: “Sorry”

Q: How do you empty a swimming pool of Canadians? / A: “Excuse me, could everyone please get out of the pool?”

Q: What’s the difference between an American and a Canadian?/ A: An Canadian not only has a sense of humour but can also spell it.

Q: Did you hear about the war between Newfoundland and Nova Scotia?/ A: The Newfies were lobbing hand grenades; the Nova Scotians were pulling the pins and throwing them back.

Q: Did you hear about the Newfoundlander who died drinking milk?/ A: The cow fell on him.

Q: Why did the Canadian cross the road? / A: He saw some American do it on TV.

Q: How do you know when a Canadian is going on a date? / A: The entire dog team has had a bath.

Q: How many Canadians does it take to change a light bulb? / A: Twelve. Four to form a Parliamentary study committee to decide how to solve the problem, one Francophone to complain that I didn’t translate this joke into French, one Native Canadian to protest that the interests of Native Canadians have been overlooked, one woman from the National Action Committee On the Status Of Women to say that women have been underrepresented in the process, one to go over the border to the Niagara Falls Factory Outlet Mall and buy a new bulb and not pay duty on it on the way back, one to actually screw it in, one to collect taxes on the whole procedure so the government can afford it, one to buy a case of Molson for everybody to drink, and one to drop the puck.

BONUS JOKE:  A Canadian is walking down the street with a case of beer under his arm.  His friend Doug stops him and asks, “Hey Bob! Whacha get the case of beer for?”
“I got it for my wife, eh.” answers Bob.
“Oh!” exclaims Doug, “Good trade.”

BONUS JOKE #2:  An American, a Scot and a Canadian were in a terrible car accident. They were all brought to the same emergency room, but all three of them died before they arrived. Just as they were about to put the toe tag on the American, he stirred and opened his eyes. Astonished, the doctors and nurses present asked him what happened.

“Well,” said the American, “I remember the crash, and then there was a beautiful light, and then the Canadian and the Scot and I were standing at the gates of heaven. St.Peter approached us and said that we were all too young to die, and said that for a donation of $50, we could return to earth. So of course I pulled out my wallet and gave him the $50, and the next thing I knew I was back here.”

“That’s amazing!” said the one of the doctors, “But what happened to the other two?”

“Last I saw them,” replied the American, “the Scot was haggling over the price and the Canadian was waiting for the government to pay his.”

BONUS JOKE #3:  In a train car there were a Canadian, an American, a spectacular looking blonde and a fat lady. During the trip the train passes through a dark tunnel, and the unmistakable sound of a slap is heard. When the train exits the tunnel, the American had a big red slap mark on his cheek.

The blonde thought – “That American idiot wanted to touch me and by mistake he must have put his hand on the fat lady, who in turn must have slapped his face.”

The fat lady thought – “This dirty old American laid his hands on the blonde and she smacked him.”

The American thought – “That crazy Canadian put his hand on that blonde and by mistake she slapped me.”

The Canadian thought – “I hope there’s another tunnel soon so I can smack that stupid American again.”

Go ahead and laugh your way through the holiday weekend… Happy Canada Day!

1 thought on “Short jokes re: Canada”