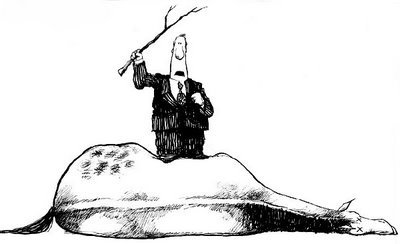 This theory is sometimes referred to as “Government’s Political Correctness.” Here’s the predicament:

The tribal wisdom of the Plains Indians, passed on from generation to generation, says that “When you discover that you are riding a dead horse, the best strategy is to dismount, then get another horse.” However, in Government, more advanced strategies are often employed, such as:

Government officials will also look to the root causes of the predicament before taking any action, i.e. what kind of parents it had, the horse’s colour, his socioeconomic background, perhaps the horse was bullied, or his mother was single, etc.

It is no wonder that, for some time now, government workers’ saddest refrain has been: It’s been so lonely in the saddle since my horse died…