Some sports fanatics will tell you this day is all about an aging football icon striving to end his career with a lasting exclamation mark. Pigskin purists will want to stack up the stats and argue a 15-1 Panthers should be able to handle the 12-4 Broncos; after all Cam Newton is marshaling a better squad all around than Peyton Manning.

Then there are the gaggles of media reporting on the worldwide T.V. coverage and swooning on the astronomical $5-million-a-pop spent for 30-seconds of ad airtime. There is that the endless commentary about those commercials and the hype about the Coldplay-Beyonce halftime show and the speculation of a costume malfunction!

However, let none of this fool you. Today is all about the food. And the #1 food of the day is the prized chicken wing. 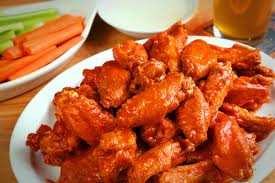 Here’s “the fact of the day”: it is estimated that more than 1.3 billion wings – a total of 162.5 million pounds of goodness – will be eaten today.

In its annual “Wing Report”, the National Chicken Council reports that this gluttonous amount of wings for Super Bowl 50 is actually up about 3%, or 37.5 million wings, from last year.

To put it into perspective, 1.3 billion wings is enough for every single person in the U.S.—man, woman, and child—to eat four each. If one of the Powerball winners spent all their winnings on wings, they would only be able to afford 76% of that.

Seriously, it is time to drop the pretense. It’s not about the Panthers-Bronco match-up; not about a spectacular sporting showcase; not even about an ancient warrior taking the ultimate prize into a setting sun. It’s the wings stupid.

So, be forewarned that today is not a day to take a breath. Honey-garlic, Texan dry rub, mild, hot or suicide, keep your elbows high and enjoy your plateful! 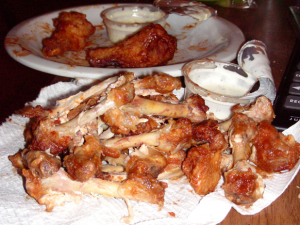 SOURCE: Americans Will Eat an Ungodly Number of Wings During Super Bowl 50