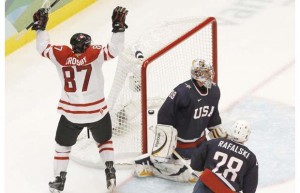 From reports the whole of the Canuck nation watched spell-bound as our Canadian heroes battled victoriously for the gold medal of hockey! Canwest News writes:

More than 22 million Canadians were glued to the tube when Canada’s Sidney Crosby scored his Olympic gold medal-winning goal against the United States on the final day of the Vancouver Winter Olympics.

To put that into perspective, that’s pretty much the number of people who lived in Canada in 1972, when Paul Henderson scored the game and series-winner in the epic Canada-Russia showdown. Guess we like our hockey, eh?

On Friday, the Bureau of Broadcast Measurement confirmed 16,674,000 people watched the Olympic men’s hockey final and when the game went into overtime and Crosby hollered “Iggy” and then flicked Jarome Iginla’s pass past a startled Ryan Miller in the U.S. goal, that audience had peaked to 22 million.

Wow! In a nation of 34 million, there were 22 million from coast to coast cheering on Sid the Kid’s feat of timeless glory! The news article goes on to quote a sociologist as saying that in international matches involving our boys on blades, hockey is “Canada’s flag-bearer sport.”  View the full articles here:

So, when we consider what it is that unifies and provides a sense of belonging for Canadians, can anyone argue with this Journal’s contention now that hockey is the glue that binds our country!