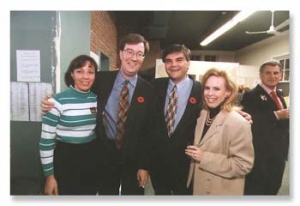 Twenty years ago today – November 10, 1997 – Jim Watson was elected Mayor of the City of Ottawa. This was a momentous day for the elected Mayor and a memorable day for me, who served as Jim’s campaign manager for his mayoralty bid.

This Ottawa election campaign was to be the last one for the old City, which was amalgamated with 12 other local municipalities in 2000 to become the new (enlarged) City of Ottawa.

That 1997 election was special for all of us involved as it was a landslide victory. Jim garnered more than 54,000 votes of the 66,000 votes cast; he won with 82 per cent of the popular vote.

Some like to point out that Jim had no competition in 1997… but the reality is he announced his candidacy well in advance and, with our aggressive pre-writ campaigning, many potential candidates thought better of running against him.

From a campaign management perspective, a lot has changed in 20 years. The pre-Internet 1990’s was a whole different era of politics and campaigning. Here are a few facts from that 1997 Mayoralty campaign that illustrate why it is so memorable.

It was quite an election; a satisfying outcome for the core campaign team after nearly 24 months of effort. We had a proverbial dream team in that campaign; a rainbow coalition that bridged partisan gulfs – bringing together Liberal, Conservative and NDP activists and supporters. It was a pleasure to work with the many talented individuals who held such diverse political perspectives. I cannot help but think that, today in our world of partisan politics, to assemble a similar team would be something very rare, if not impossible.

On the Sunday before the Monday vote, I recall our campaign office was a-buzz as we anticipated what was to happen. We were holding a number of planning meetings, ensuring the GOTV kits were distributed — and there was one final campaign team event at headquarters with pep talk from the candidate. Lots of noise; plenty of people.

These are wonderful memories.

So, on this 20th anniversary of Jim Watson’s first victory night, I congratulate the Mayor on his longevity in office and I happily reflect on “our dream team” that delivered his first mayoralty victory and provided all of us involved with so much to recall.

(Photo: Lisa and I, and Maureen Murphy, with Jim in the campaign headquarters on election night. It’s remarkable we have not aged!)