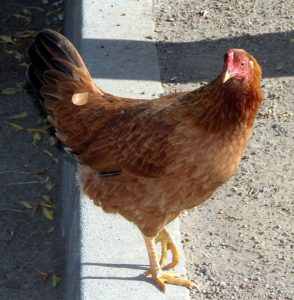 GEORGE W. BUSH: We don’t really care why the chicken crossed the road. We just want to know if the chicken is on our side of the road or not. The chicken is either with us or against us. There is no middle ground here.

AL GORE: I invented the chicken. I invented the road, therefore, the chicken crossing the road represented the application of these two different functions of government in a new, reinvented way designed to bring greater services to the American people.

COLIN POWELL: Now at the left of the screen you clearly see the satellite image of the chicken crossing the road.

PAT BUCHANAN: To steal a job from a decent, hard-working American.

RUSH LIMBAUGH: I don’t know why the chicken crossed the road, but I’ll bet it was getting a government grant to cross the road, and I’ll bet someone out there is already forming a support group to help chickens with crossing-the-road syndrome. Can you believe this? How much more of this can real Americans take? Chickens crossing the road paid for by their tax dollars, and when I say tax dollars, I’m talking about your money, money the government took from you to build roads for chickens to cross.

BILL CLINTON: I did not cross the road with THAT chicken. What do you mean by chicken? Could you define chicken, please?

JERRY FALWELL: Because the chicken was gay! Isn’t it obvious? Can’t you people see the plain truth in front of your face? The chicken was going to the “other side.” That’s what they call it — the other side. Yes, my friends, that chicken is gay. And, if you eat that chicken, you will become gay too. I say we boycott all chickens until we sort out this abomination that the liberal media whitewashes with seemingly harmless phrases like “the other side.”

MARTIN LUTHER KING, JR.: I envision a world where all chickens will be free to cross roads without having their motives called into question.

JOHN LENNON: Imagine all the chickens crossing roads in peace.

MARTHA STEWART: No one called to warn me which way that chicken was going. I had a standing order at the farmer’s market to sell my eggs when the price dropped to a certain level. No little bird gave me any insider information.

BARBARA WALTERS: Isn’t that interesting? In a few moments we will be listening to the chicken tell, for the first time, the heart-warming story of how it experienced a serious case of molting and went on to accomplish its life-long dream of crossing the road.

CAPTAIN KIRK: To boldly go where no chicken has gone before.

FOX MULDER: You saw it cross the road with your own eyes! How many more chickens have to cross before you believe it?

BILL GATES: I have just released eChicken 2013, which will not only cross roads, but will lay eggs, file your important documents, and balance your checkbook – and Internet Explorer is an inextricable part of eChicken.

ARISTOTLE: It is the nature of chickens to cross the road.

VOLTAIRE: I may not agree with what the chicken did, but I will defend to the death its right to do it.

KARL MARX: It was an historical inevitability.

SIGMUND FREUD: The fact that you are at all concerned that the chicken crossed the road reveals your underlying sexual insecurity.

ALBERT EINSTEIN: Did the chicken really cross the road or did the road move beneath the chicken?

ERNEST HEMINGWAY: To die. In the rain. Alone.

COLONEL SANDERS: I missed one?

The joke was selected from Epic Political Jokes & Quotes – the 150-page-plus e-book bursting with funny guffaws, “shaggy-dog” stories and sideways jokes about politicians and politics. Read more about it here. Order your copy here.