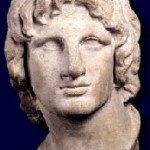 “Leadership is practiced not so much in words as in attitude and action.” – as quoted by American business leader Harold S. Geneen. This truth is borne out by the actions of Alexander the Great (356-323 B.C.) is this demonstrative tale as told by the Plutarch.

Alexander the Great was leading his army homeward after the great victory against Portus in India. The country through which they now marched was bare and desert, and his army suffered dreadfully from heat, hunger, and, most of all, thirst. The soldiers’ lips cracked and their throats burned from want of water, and many were ready to lie down and give up.

About noon one day the army met a party of Greek travelers. They were on mules, and carried with them a few vessels filled with water. One of them, seeing the king almost chocking from thirst, filled a helmet and offered it to him.

Alexander took it into his hands, then looked around at the faces of his suffering soldiers, who craved refreshment just as much as he did.

“Take it away,” he said, “for if I drink alone, the rest will be out of heart, and you have not enough for all.”

So he handed the water back without touching a drop of it. And the soldiers, cheering their king, leaped to their feet, and demanded to be led forward.

1 thought on “The essence of leadership”