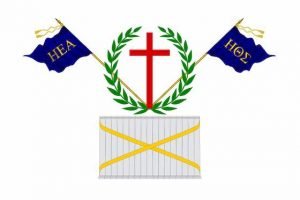 1. Greek Independence Day is a national holiday celebrated annually in Greece on March 25, commemorating the start of the War of Greek Independence in 1821.  The “Greek Revolution” was a successful war of independence waged by the Greek revolutionaries against the Ottoman Empire between 1821 and 1830. 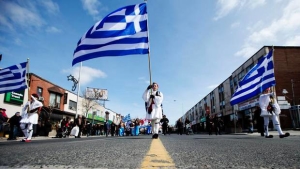 2. In celebration of Greek Independence Day, towns and villages throughout Greece hold a school flag parade, during which schoolchildren march in traditional Greek costume and carry Greek flags. There is also an armed forces parade in Athens. Around the world, Greek emigrants and those of Greek descent also parade and conduct flag ceremonies in celebration of the 9-year victorious struggle to free their country. 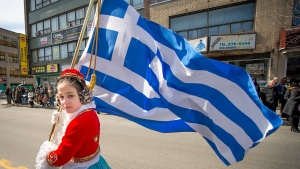 3. Greece had been part of the Ottoman Empire since 1453 with the Byzantine Empire fell to the Turks. Greeks remained under the Ottoman rule for nearly 400 years. Through these years, Orthodox Christians were granted some political rights, but they were considered inferior subjects. The majority of Greeks were called “Rayah” by the Turks, a name that referred to the large mass of non-Muslim subjects. However, through the centuries, Greek religion and their sense of Hellenism remained strong, as did the desire for some form of independence fostered, in large part, by the Greek Orthodox Church, as well as the survival of the Greek language. 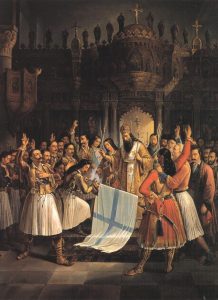 4. The Greek revolt was precipitated on March 25, 1821, when Bishop Germanos of Patras raised the flag of revolution over the Monastery of Agia Lavra in the Peloponnese. Thus began the 9-year revolution for freedom. 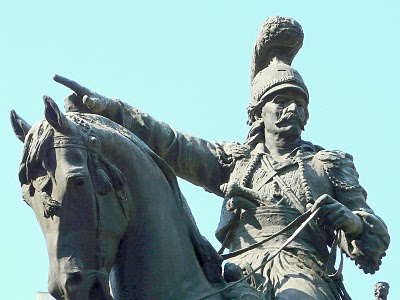 5. Here is a summary of the war. The Greeks experienced early successes on the battlefield, including the capture of Athens in 1822, but infighting ensued. By 1827 Athens and most of the Greek isles had been recaptured by the Turks. Just as the revolution appeared to be on the verge of failure, Great Britain, France, and Russia intervened in the conflict. At the naval Battle of Navarino in 1827, the combined British, French, and Russian forces destroyed an Ottoman-Egyptian fleet. A Greco-Turkish settlement was determined by the European powers at a conference in London and Greece was declared an independent monarchical state under their protection in 1830. 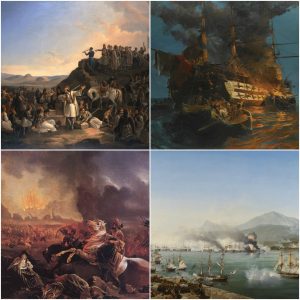 6. The struggle for the liberation of all the lands inhabited by Greeks continued. By mid-1832 the northern frontier of the new state had been set along the line extending from south of Volos to south of Árta. In 1864, the Ionian islands were added to Greece; in 1881 parts of Epirus and Thessaly. Crete, the islands of the Eastern Aegean and Macedonia were added in 1913 and Western Thrace in 1919. After World War II the Dodecanese islands were also returned to Greece. 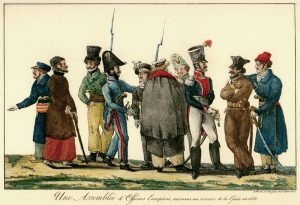 7. The Greek struggle had elicited strong sympathy in Europe, and many leading intellectuals had promoted the Greek cause, including and most notably the English poet Lord Byron. His prestige and his role as a representative of the philhellenic London Committee (which raised both moral and financial support) came in a critical time for the course of the Greek cause. Lord George Byron also fought in the rebellious areas of Greece from December 1823 until 7 April 1824, when he died at Missolonghi.  Dionysios Solomos wrote a poem Ode on the Death of Lord Byron (first verse) which honours the poet and the liberal revolutionary:

For a moment, Liberty,
Let the war, the bloodshed sleep;
Hither come and silently
Over Byron’s body weep. 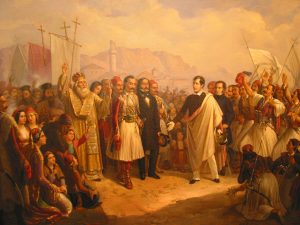 8. The popular cry “Freedom or Death” became the motto of the revolution and was constantly heard throughout the liberation. This war-cry is also a significant part of the Greek flag: it is believed that the nine lines of the flag reflects the number of syllables in the Greek phrase “Eleftheria i Thanatos” = Freedom or Death. Not only the flag, but the the Greek National Anthem “Hymn to Liberty” was born of the revolution. Dionysios Solomos wrote the lyrics in 1824, Nikolaos Mantzaros put it to music in 1828. (This English translation of the revolutionary ballad is by Rudyard Kipling in 1918.) 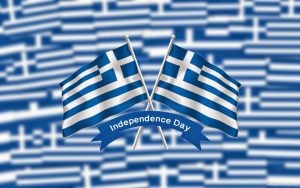 9. Greeks celebrate the 25th of March as a double holiday: a historical and a religious one. Independence Day coincides with the Greek Orthodox Church’s celebration of the Annunciation to the Theotokos, when the Archangel Gabriel appeared to Mary and told her that she would bear the son of God. 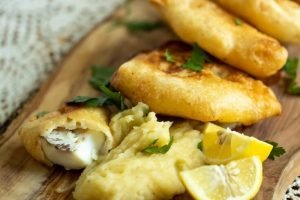 10. A custom across the country on this day is to eat crispy, fried cod fish with garlic sauce (Bakaliaros skordalia). This has to do with the Lent before Eastern, where no animals or animal products should be eaten. However the Orthodox Church allowed an exception for the celebration of the Annunciation and that it the Cod fish! Here is the recipe for Bakaliaros skordalia. 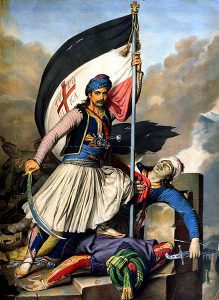