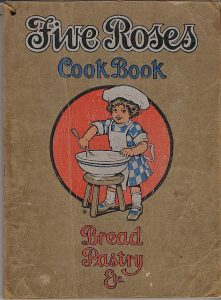 The Lake of the Woods Milling Company released the first edition of the Five Roses Cookbook in 1913 as a collection of around 600 recipes submitted by women across Canada via a contest the company held.

A later 1915 edition of this same book has an introduction that states it is an all-Canadian publication: “The recipes were supplied by Canadian housewives. The book was printed in a Canadian shop, and the paper, both inside and cover stock, was produced in a Canadian mill.… Already, nearly 950,000 copies are in daily use in Canadian kitchens — practically one copy for every second Canadian home.”

Combine the dry ingredients in a large mixing bowl. Add the butter and rub into the flour until mixture resembles coarse meal. Drizzle in enough water until the dough begins to hold together.

Turn the dough out onto a floured surface and shape into a disc (do not overwork the dough).

Wrap in plastic wrap and refrigerate for 30 minutes.

In small bowl mix together walnuts, currants and raisins.

Divide the walnut-fruit mixture between the tart shells.