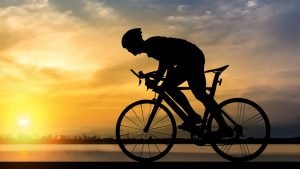 First cyclist that drove his bicycle around the world was Fred A. Birchmore. He pedaled for 25,000 miles and traveled other 15,000 miles by boat. He wore out 7 sets of tires.

The fastest measured speed of riding a bicycle on a flat surface is 133.75 km/h.

In 2011, Austrian racing cyclist Markus Stöckl drove an ordinary bicycle down the hill of a volcano. He attained the speed of 164.95 km/h.

The slow cycling record was set by Tsugunobu Mitsuishi of Japan in 1965 when he stayed stationary for 5 hours, 25 minutes.

Smallest bicycle ever made has wheels of the size of silver dollars.

The longest tandem bicycle seated 35 people, it was more than 20 meters long.

The Wright brothers who built the first flying airplane, operated a small bike repair shop in Dayton, Ohio. They used their workshop to build the 1903 Wright Flyer.

Popular bicycle type BMX was created in 1970s as a cheaper alternative to motocross races.

The prototype of the mountain bike was not developed until 1977.

E-Bikes are very popular because they make daily commutes much easier.

Half of all the parts of a typical bicycle are in the chain.

Bicycles are more efficient in transforming energy to travel than cars, trains, airplanes, boats, and motorcycles. Worldwatch Institute compared energy used per passenger-mile (calories) to find that a bicycle needed only 35 calories, whereas a car expended 1,860. Bus and trains fell about midway between.

The same energy that is expended for walking can be used when cycling to go three times faster.

Most famous bicycle race in the world is the Tour de France which was established in 1903 and is still driven each year when cyclist from all over the world take part in 3 week event that is finished in Paris. It’s considered to be the biggest test of endurance out of all sports. 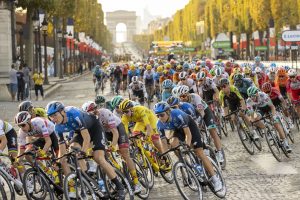