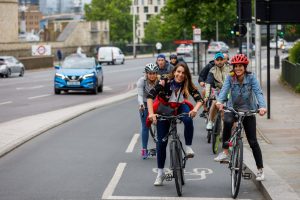 The world manufactures about 100 million bikes each year.

There are over 1 billion bicycles currently being used all around the world.

China boasts more than a half billion bicycles.

The UK is home to over 20 million bicycles.

A total of 5% of all trips in United Kingdom are made with a bicycle. In the US this number is lower than 1%.

There are at least 400 bicycle clubs in America, with membership from 10 to 4,000 members.

36% of Copenhagen’s workforce commute daily on bicycles, and only 27% drive cars.

Over 90% of all bicycle trips are shorter than 15 kilometers.

Cycling is one of the best pastimes for people who want to reduce the risk of having heart disease or a stroke.

It is 20 times cheaper to maintain a bicycle than a car.

Bicycles save over 238 million gallons of fuel every year.

Daily 16 kilometer ride (10 miles) burns 360 calories, saves up to 10 euros of budget and saves the environment from 5 kilos of carbon dioxide emissions that are produced by cars.

There are twice as many bicycles in the world than cars.