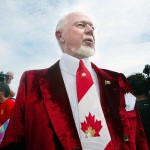 In a series of tweets last week, the By George Journal highlighted the colourful life of sports commentator Don Cherry. Taken largely from the Toronto Star news expose “The wonderful, unlivable life of Don Cherry” written by Vinay Menon, we offered many quotes and tidbits of information about the man who has become a Canadian icon.

Our Don Cherry Twitter series and our previous blog article, posted on the eve of the Stanley Cup finals, got By George Journal featured in The Fan Zoo Hockey Daily last week.

Here are those quotes and facts, first issued on the ByGeorgeJournal Twitter channel:

Join us on Twitter for topical information and bons mots: