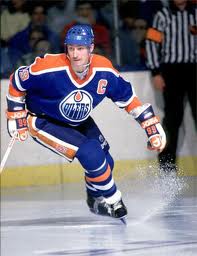 Perhaps the most remarkable comment about Wayne Gretzky came from Lowell Cohn. This American sportswriter once said of “The Great One”:  “Some guys play hockey. Gretzky plays 40 mph chess.”

For hockey enthusiasts, there should be no need to celebrate the mastery of this superb hockey player. Wayne Gretzky is hockey’s all-time leading point scorer – and has been for more than 30 years. On October 15th 1989, The Great One got an assist and then a goal to notch points 1,850 and 1,851 and surpass “Mr. Hockey” Gordie Howe’s point total.

Let’s remember Wayne Gretzky’s many achievements with ten of his memorable quotes:

The last words on The Great One must go to Canadian radio personality Peter Gzowski, who poetically described Wayne Gretzky’s magic in his 2004 piece “The game of our lives.”:

“There is an unhurried grace to everything Gretzky does on the ice. Winding up for the slapshot, he will stop for an almost imperceptible moment at the top of his arc, like a golfer with a rhythmic swing. He has more room in the flow of time and Gretzky uses this room to insert an extra beat into his actions. In front of the net, eyeball to eyeball with the goaltender . . . he will . . . hold the puck one . . . extra instant, upsetting the anticipated rhythm of the game, extending the moment. . . He distorts time, and not only by slowing it down. Sometimes he will release the puck before he appears to be ready, threading the pass through a maze of players precisely to the blade of a teammate’s stick, or finding a chink in a goaltender’s armour and slipping the puck into it . . . before the goaltender is ready to react.”