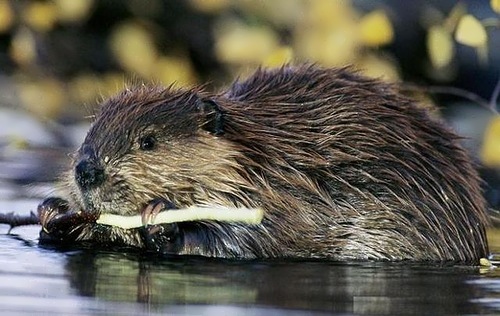 1. Giant beavers roamed Eurasia and North America in the Pleistocene era, rubbing shoulders with mastodons and mammoths. They were 10 feet in length, including tail just smaller than a MINI Cooper and weighed up to 800 pounds.

2. The modern beaver is the second-largest rodent in the world (the capybara of South America is the first). An average adult beaver weighs 35 to 70 pounds and measures 4 feet long, including a 12-inch tail.

3. A large adult beaver skin yielded enough fur for 18 beaver hats. The beaver was hunted and trapped almost to the point of extinction. They are firmly established once more, thanks to a conversation movement championed by Grey Owl, the infamous English immigrant who posed as a Metis in the 1930s.

4. Grey Owl claimed to have compiled a beaver dictionary by listening to the utterings of his two pet beavers, Rawhide and Jellyroll. He stated that he could recognize 49 words and expressions that were intelligible to all beavers, but the manuscript of this dictionary is now missing and presumed lost forever.

5. Beavers are well adapted to working underwater. A secondary transparent eyelid allows them to see, and specialized ducts allow them to close off their ears, nostrils and lips so they can chew without drowning.

6. The two chisel-like upper front teeth of the beaver grow continuously and are sharpened by the act of gnawing on trees. They are not buck teeth, but rather point inwards to facilitate chewing wood.

7. Beavers groom themselves constantly to keep their pelt waterproof with the oil (castoreum) they produce in two glands near their anus. Castoreum also keeps their soft, fine under-fur from matting. Moisture never penetrates their skin, even after a long time swimming underwater.

8. The urge to build dams stems from an instinctive aversion to the sound of running water. Beavers will try desperately to stem the flow, thereby flooding their surroundings to create a pond deep enough that the water wont freeze in winter. They eat sticks in these lean months, so they spend the entire fall submerging twigs in the pond and poking them into the muddy bottom to store them.

9. Contrary to popular legend, beavers do not know how to fell trees so that they fall in a certain direction. Beaver remains have been found that show that the trees they were chewing fell towards them, pinching and crushing their skulls. With their work, it is the female beavers that do most of the engineering and lodge planning, while the male beavers inspect the structure and patch the leaks.

10. Beavers are monogamous and mate for life. And a word to dispel the myth about male beavers biting off their own testicles if provoked. This dates back to Aesops fables when the beaver was hunted for its castoreum, which people believed was produced in the testicles. A story popular at the time held that beavers would see a hunter coming and would bite off their testicles and toss them to the hunter to avoid being killed. If they were chased again, they would flash the hunter to show that they already made the ultimate sacrifice.

2 thoughts on “10 Fascinating Facts about Beavers”