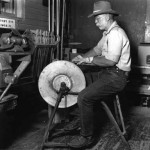 WARNING: What follows is another axe-grinding session regarding one of our greatest irritants: big government and our politicians’ inabilities to control spending and cut into the ever-growing, bloated bureaucracy.

The last few weeks have brought into focus, once again, how our Canadian elected officials have learned little from the fiscal mismanagement of many of the countries in Europe, not to mention the economic mess south of our borders. Both the federal and Ontario budgets were inadequate responses to the serious financial challenges Canada faces. The federal Conservatives delivered a milquetoast approach to government spending and public sector cuts, rather than the definitively conservative response that was required. And, ignoring the siren calls of restraint, the Dalton McGuinty’s Liberals simply continued to dig Ontarians into a deeper, larger debt hole.

Here are some points of fact about the recent budgets that signal those storm clouds on our Canadian horizon have darkened and become ever-more ominous.