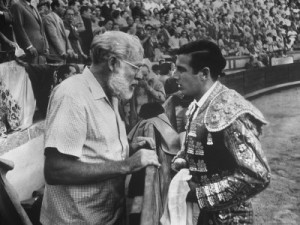 Through this year, By George Journal is celebrating one of the greatest authors of our time – Ernest Hemingway. Herein is 20 of our favourite quotes from Papa’s 1932 tribute to the sport and art of bullfighting – Death in the Afternoon.

In his own bibliographical note, Hemingway writes that the book “is not intended to be historical or exhaustive. It is intended as an introduction to the modern Spanish bullfight and attempts to explain that spectacle both emotionally and practically.”

Interwoven in his expose of bullfighting, Hemingway also provides his opinions on good story-telling and excellence in writing. In fact, within this book is found some of the Master’s greatest insights into his craft.