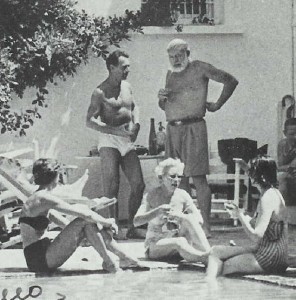 In 1968, A.E. Hotchner wrote a very moving tribute to his great friend Ernest Hemingway. In his book, Papa Hemingway, Hotchner shared many wonderful stories and his insight into the brilliant author. Here are some great Hemingway quotes, as recounted by A.E. Hotchner.

Photo: Hotchner and Hemingway (and Mary seated in the middle) poolside at LaConsula, Malaga, Spain, the morning of his 60th birthday – 1959