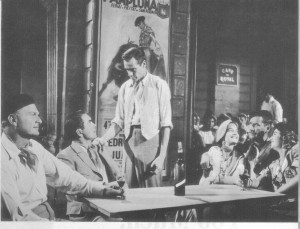 Ernest Hemingway’s 1926 novel The Sun Also Rises is an exploration of love and morality in the streets of Paris and Pamplona. It peers deeply into those things that provide man with meaning to his life and to relationships. The characters are not admirable, at times unlikable, yet the are very alluring. The reader is drawn to them like a moth to a flame – and, in getting to know Jake, Brett and Robert, we are left singed and anxious.  With this story, Hemingway succeeded in giving us a remarkable account and unforgettable lesson.

Here is a dozen gems from The Sun Also Rises:

The photo is from the 1957 movie starring Tyrone Power, Ava Gardner and Errol Flynn.