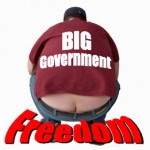 It has become annoying that our political leaders today take no notice of just how big and intrusive Government has become for Canadians. It is equally irritating that they do not recognize (and, in many instances, try to rationalize) just how much government costs its citizens.

Government has become too big, too costly. FACT: our Federal Government oversees the largest and most expensive federal bureaucracy Canada has ever known. What is most troubling is that the government has grown under a Conservative watch – and these “able fiscal managers” have done little to trim the rank and file, done little to curb government spending.

Another FACT: This past weekend, Ontarians were presented a new Liberal Premier whose answer to our Province’s ailments is to increase government activity. Kathleen Wynne is about to give us more of the same of Dalton McGuinty’s fiscal policies – the same policies that ballooned Ontario’s debt, sunk its credit rating and labeled the Province: “Have-Not”. Wynne is all about tax and spend; her agenda is greater dollars to health care and transportation projects, new universally delivered programs for both drugs and child care – and a balanced budget? Very Liberal-esque.

FACT: Increased government comes at a cost. Given our federal and provincial governments spend more than they tax, the governments are deferring the payments for today’s services and programs to future taxpayers: our children and grandchildren.  Simple question:  When will Canadians wake up to this fact?

As a splash of cold water to the face, By George Journal offers a few observations from Ronald Reagan’s January 1981 inauguration speech. Here’s a refreshing view on the role of government that should be heeded by our political leaders today. Reagan’s bons mots:

Here’s a final observation about the exorbitant costs of government today – and the fact that nobody has their eyes on the till when it comes to spending taxpayers’ dollars. This is but one tangible example of the unfathomable costs of government taken from our headlines this week (there are so many similar examples of government expense that go unreported and unnoticed). Think about what you could do with a million dollars.  $1,000,000.   Now, take a look at the latest from Ottawa:  It cost taxpayers exactly $1,061,448 to ship armour-plated limousines to India last year for Prime Minister Stephen Harper’s official visit, documents from the Department of National Defence have revealed. – National Post

4 thoughts on “The Costs of our Big Governments”