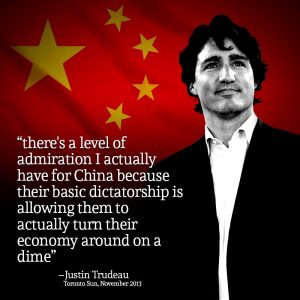 If we are to believe the mainstream media’s pundits and polls, in the next federal general election, the unpopular PM Stephen Harper will be trounced by the dashing Liberal Leader Justin Trudeau. The left-of-centre mainstream media and chattering classes has excitedly ordained this to be so. The only thing that might overturn this prognosis is a few hard slaps of reality to awaken the Canadian electorate.

Well, here’s a slap in the face. Here is a comment recently made by Justin Trudeau at a Liberal “Ladies Night” fundraiser in Toronto that could not have been fabricated – and believed. We have reproduced it verbatim because the comment is something that should not be forgotten. It speaks volumes for Justin Trudeau’s (lack of) political perspective and thinking process.

This is what Justin Trudeau said in response to a question about which foreign country’s government he most admires (verbatim):  “You know, there’s a level of admiration I actually have for China because, ah, because their basic dictatorship is allowing them to actually turn their economy around on a dime and say ‘we need to go green fastest, we need to start investing in solar.’ I mean there is a flexibility that I know Stephen Harper must dream about of having, a dictatorship that he can do everything he wanted, that I find quite interesting.”

And here’s how Trudeau rephrased his response to correct himself, during a TV interview the next day (again, verbatim):  “Ah, in this world we are competing with countries that have the capacity to react to big issues quickly and completely. We need to make sure that even though we have to compete with them, ah, we can get things done completely, and that means that not, that not falling back on our, ah, not weakening on our human rights, making sure that we are still protecting all of the things we know. But we do need to get together to support people.”

An Ottawa Citizen editorial on these remarks rightly observes: “A Miss Teen USA contestant wouldn’t get away with saying something like that.”

This same editorial concludes with the comment: “This is not to impugn Trudeau’s intentions, of course. A more charitable and fair-minded conclusion is called for, one that recognizes the Liberal party as a shambles, and its leader, Justin Trudeau, as a ridiculous, morally illiterate and fathomlessly unserious person.”

Again, this is an instance that should not be forgotten a few years from now when Canadians head to the polls to select their next Prime Minister.

1 thought on “Did our next Prime Minister really say that?”