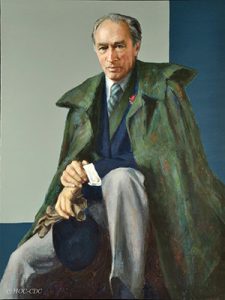 A few years ago, an Ottawa public policy think tank – The Macdonald-Laurier Institute –  hosted a lively debate on the resolution: Pierre Trudeau was Canada’s most disastrous Prime Minister. The Institute brought David Frum to speak to the affirmative and Lawrence Martin to speak against the resolution. Decades after his departure from Parliament Hill, the question of Pierre Trudeau’s impact on our country still is a topic of heated discussion. Here are abbreviated highlights from the opening statements of both arguments regarding P.E.T.’s record in office.

Lawrence Martin: No, Trudeau was not a disaster.

To read the full arguments, for and against, visit the Macdonald-Laurier Institute’s website, where they have reprinted the Ottawa Citizen columns containing David Frum’s and Lawrence Martin’s opening statements. Click here.

1 thought on “Question: Was Pierre Trudeau a disaster?”