Here are some of our favourite “election” quotes for this election year: 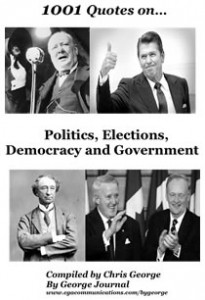 The quotes are taken from the By George e-publication: 1001 Quotes on Politics, Elections, Democracy and Government.

Read more on this collection of quotes and how to get your own copy.