Surprisingly, there are folks who don’t seem to be bothered by the debt load the Ontario government has incurred. For many Ontarians, it just doesn’t matter. But, here’s why it should. Simply put: Interest payments on government debt eat up revenue at the expense of other priorities.

Interest payments on government debt in Canada consume a sizeable share of government revenue, leaving less money for public priorities such as schools, hospitals, highways and lower taxes. This is best explained by the Fraser Institute (an independent, non-partisan Canadian public policy think-tank) – which, by the way, is sounding a siren on Ontario’s debt load.

A recent Fraser Institute study showed that in Ontario, the provincial government in 2013/14 spent $10.6 billion on interest payments, or 9.1 per cent of overall revenue, eclipsing the entire budget for the Ministry of Community and Social Services ($10.1 billion), and nearly topping the province’s total infrastructure spending ($10.8 billion).

“As Ontario struggles to rein in deficits and growing government debt, interest payments chew up big chunks of taxpayer money at the expense of priorities such as health care and education or potential tax cuts,” said Charles Lammam, study co-author and resident scholar in economic policy at the Fraser Institute.

More on this study here: Ontario burdened with debt 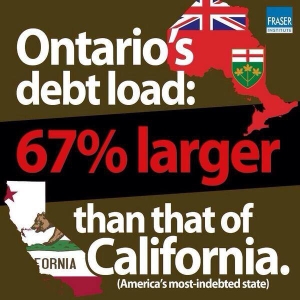 In an earlier report, the Institute calculated that Ontario has more debt than California – the poster child for fiscal irresponsibility.  Here are the numbers: Despite the province’s smaller size, Ontario’s $267.5 billion (Cdn) outstanding government debt is higher than California’s $144.8 billion (US). As a share of the economy, Ontario’s bonded debt (the part of a government’s debt represented by bonds) is 40.9 per cent compared to California’s 7.6 per cent.

Put in another way: Ontario’s debt relative to the size of its economy is more than five times larger than the same measure for California. So, every Ontarian owes $20,166 (Cdn) compared to $3,844 (US) for every California resident.

The Fraser Institute identifies the culprit has been the overspending of the Liberal government over the last decade. Charles Lammam and Mark Milke of the Institute write:
How governments manage their finances matters a great deal. Spend and borrow too much and the result is a spiral of increasing deficits that create ever higher debt. Then ever-more tax dollars end up spent on debt interest — not on education, healthcare, administering provincial courts, or other areas in which provincial governments are involved.
In a recent study examining how well Canada’s premiers are managing government spending, taxes, deficits and debt, it turns out Ontario’s Premier Kathleen Wynne has one of the worst records in the country. In contrast, now-departed Newfoundland and Labrador Premier Kathy Dunderdale ranked above all her counterparts on as the most fiscally prudent, in relative terms…
Wynne has a poor ranking because Ontario’s spending increased faster than economic growth and also more than inflation plus population growth. She also ran the largest average deficit among the premiers and increased government debt…
Wynne, of course, is the premier of Canada’s largest, most populous province; continued fiscal imprudence on that large of scale is simply reckless.

Finally, the Canadian Taxpayers Federation has listed 10 Facts About the Ontario Debt – facts that should concern us all. 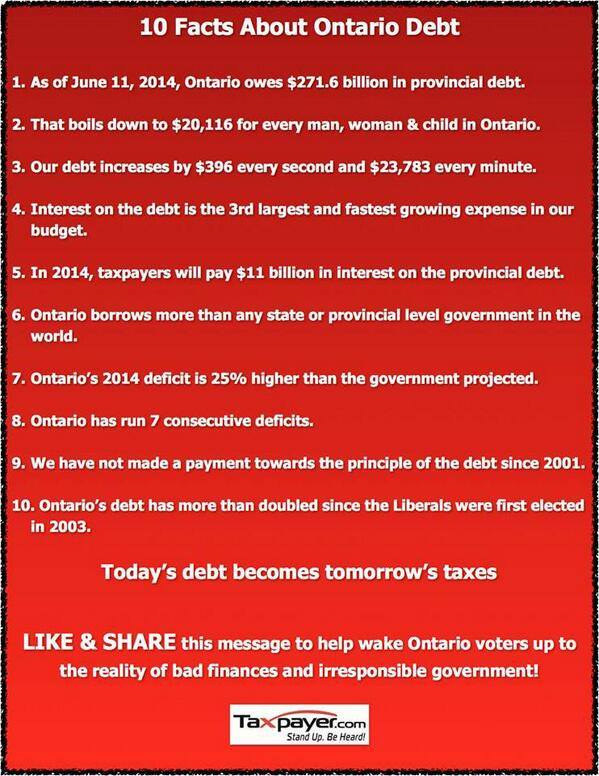 2 thoughts on “The Ontario debt problem is serious”