Did we need further proof that Ontario’s public sector enjoys much more than “the rest of us”? Not really, though here it is: a Fraser Institute study just released says that “Government workers in Ontario receive higher wages and likely more generous non-wage benefits than their private sector counterparts.”

Niels Veldhuis, president of the Fraser Institute, says in a released statement: “As the Ontario government grapples with a $12.5 billion deficit, it has identified government-sector compensation as a way to restrain spending. Indeed, in light of ongoing collective bargaining negotiations, now is an opportune time to scrutinize the compensation of government employees, which consumes over half of program spending”

And wages are only part of an employee’s total compensation. Non-wage benefits — including pensions, early retirement and job security — can represent an important portion of an overall compensation package. Here we find our fat cats have a cushy life indeed. Here are the non-wage benefits the Fraser Institute study examines:

In a Financial Post piece economists Charles Lammam and Niels Veldhuis make the point that the fat public sector pay cheques are both “unfair and unsustainable”. They write:

The Ontario government is currently deep in negotiations with public sector unions including those representing bureaucrats, teachers, and police officers. On compensation costs, finance minister Charles Sousa said: “We must continue to provide for net zeros in the negotiations … to ensure that we continue to curb our spending.”
As Sousa’s government stares in the face of a $12.5-billion deficit and mounting debt, any belt-tightening initiative must involve the compensation of government employees, which consumes more than half of provincial government program spending. And it’s not just an issue for the provincial government. Municipalities also pay wages and benefits to government workers above those of comparable private sector positions.
This is about more than just economics. It’s unfair for government workers to receive a premium paid for by private sector workers who receive less overall compensation for similar work.

Yet the fat cats are screeching

Yet hundreds of public sector workers from across Ontario gathered at Queen’s Park this week to warn Premier Wynne that any type of government austerity program will result in a strike. Union president Smokey Thomas is quoted as saying: “Come to the bargaining table, get all those Draconian concessions off the table, bargain fairly (and) you will get a contract. Wynne has come with something worse than Tim Hudak or Mike Harris or any right-winger could have ever dreamed up. I truly believe Kathleen Wynne thought ‘we can make OPSEU fold up real fast’ and they were wrong… We didn’t pick this fight but we will damn well finish this fight.”

These union claims of entitlement would be farcical if it wasn’t so real. Ontario Liberals have a lot to answer for as they successfully belled the cat in last year’s election. Recall, Kathleen Wynne and OPSEU (and all other unions across the Province) were in bed with one another to secure a Liberal vote and the return the Ontario Liberals to power. Promises were made. Expectations raised. Votes delivered. Is there any surprise that today unions feel cheated by the Premier and her Liberal Party?

So, the unions are screeching and the Premier is secure to do anything she wants with her 4-year majority. On one hand we have this union-Liberal tango and, on the other hand, we have the growing gap between public and private sectors’ pay and benefits. And Ontario taxpayers are left with a sideline view of this fat cat fight.

The Ontario debt problem is serious 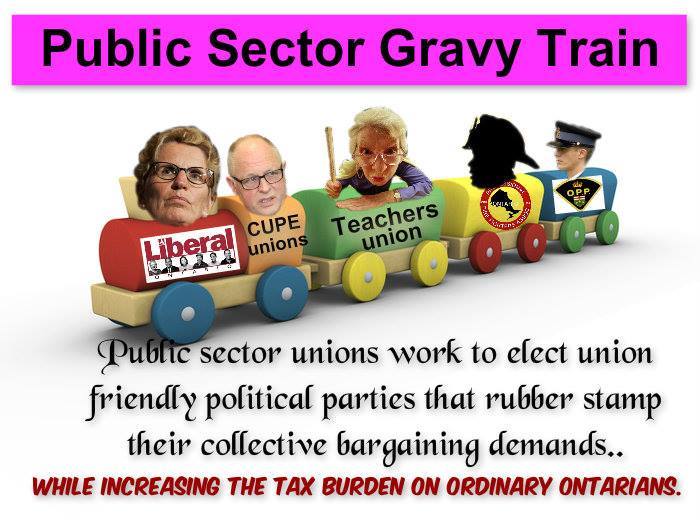