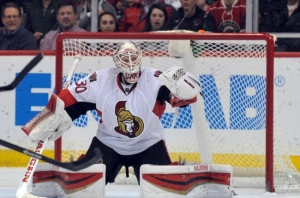 Forget Parliament Hill and the Red Chamber of “sober second thought.” Forget even the courts and Mike “the Puffster” Duffy’s trial – or the auditor’s take on the high-flying “I paid it all back” Wallin.  If you want the real Senators story in Ottawa these days, you need to turn your attention to the excitement at the ice rink.

The Ottawa Senators playoff bid has the whole of the Nation’s Capital abuzz!

Last evening, the Senators went into Madison Square Gardens and defeated the New York Rangers. The story of the night was – again – Andrew Hammond, who made 26 saves and recorded a 3-0 shut-out of the top-dogs in the NHL Eastern Conference.

The Ottawa Senators are 11-0-4 in their past 15 one-goal games. Seven of those wins have come in overtime / shootout games. They are 22-4-4 since February 10 when they were buried in the league standings and considered a long shot to make the playoffs. Now, with the win last night, they are one game away from post-season play.

The underlining reason for this fantastic turn-around is a minor-leaguer’s Cinderella story. It is the aging hanger-on-er (at 27 years old) Andrew Hammond, beloved by fans as “The Hamburgler,” who has had a dream-like run posting a 14-0-1 record with a .946 save percentage in his first 15 starts.

What a Sens-ation by a most unlikely hero!

You have to believe that Steve, Tommy and the-second-coming-of-PET would want this kind of bounce and momentum going into their playoff run!