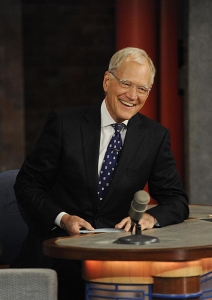 Last night was, well, the last night… After a total of 6,028 The Late Show broadcasts, David Letterman signed off with class: “The only thing I have left to do for the last time on a television program is say thank you and good night.”

In tribute to David’s remarkable career, the By George Journal provides the following links for you to enjoy…

‘Our long national nightmare is over’: Letterman signs off after 33-year run

For the record, here is the very last of the Letterman’s Top Ten lists…

The category was “Things I’ve Always Wanted to Say to Dave.”

10. Alec Baldwin: “Of all the talk shows, yours was the most geographically convenient to my home.”

9. Barbara Walters: “Did you know you wear the same cologne as Moammar Gadhafi?”

8. Steve Martin: “Your extensive plastic surgery was a necessity and a mistake.”

7. Jerry Seinfeld: “I have no idea what I’ll do when you go off the air. You know, I just thought of something. I’ll be fine.”

6. Jim Carrey: “Honestly, Dave, I’ve always found you to be a bit of an over-actor.”

5. Chris Rock: “I’m just glad your show is being given to a white guy.”

4. Julia Louis-Dreyfus: “Thanks for letting me take part in another hugely disappointing series finale.”

2. Tina Fey: “Thanks for finally proving men can be funny.”

For more highlights and unforgettable clips from the show, visit the official The Late Show YouTube channel:
Late Show with David Letterman

Thank you David Letterman for all the laughs and all the memories!