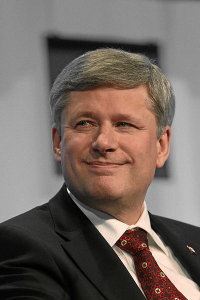 At the end of August, early on in the election campaign, By George Journal editor Chris George made the prediction that in the last 10 days of the campaign, Prime Minister Stephen Harper would make a bold move. To snatch victory from the jaws of defeat, it was predicted that Harper would announce his impending resignation. Should Canadians give the Conservatives a majority mandate, he would promise to step down in Fall 2017. By promising not to fulfill a full four year term, Harper would win over those Canadians wavering away from the Conservatives, unable to vote again for his leadership.

In that By George post, it was boldly stated that this move would alter the outcome of the election:

“PM Stephen Harper’s announcement in the late stages of the campaign will be that game-changer that will determine this election vote.”

Well, the predicted turn of events did not materialize and the 42nd electoral history was made of other stuff. The By George soothsaying rubbish was swept away to the waste-bin…

But wait. In post-election commentary from Conservative campaign operatives, it has been revealed that this strategic move was indeed in play! In a Toronto Star article earlier this week – Tories considered telling voters that Stephen Harper would not seek re-election – we learn that this gambit was being seriously considered.

In the final days before the election, Prime Minister Stephen Harper’s top campaign organizers floated the idea of telling voters he would not seek another term if he won, the Star has learned.

“It was not Harper’s record or his policies — it’s just that people hated Harper and we saw it happening early,” said one insider, who spoke on condition of anonymity in order to discuss internal campaign machinations.

Because the Tories’ research was confirming that fear, they considered replicating Cameron’s bold gambit of earlier this year when he promised to serve only a final five-year term.

But it soon became clear to those who trial-ballooned the idea to a handful of trusted party insiders and candidates that the tactic would backfire over questions about who would be Harper’s successor.

Now, the armchair campaign strategist gets the better of us at By George and we are now left to amuse ourselves by asking a few rhetorical questions like:

Of course this all assumes that Stephen Harper would have entertained his retirement announcement in the first place… many doubt his ego would have allowed such a move.

But, you have to wonder, would this have made the difference?