The Genocide of Greeks living in the lands south of the Black Sea took place between 1914 and 1923. Here are ten facts you need to know about this atrocity.

SUMMARY: The Greek genocide, part of which is known as the Pontic genocide, was the systematic ethnic cleansing of the Christian Ottoman Greek population from its historic homeland. It was instigated by the government of the Ottoman Empire against the Greek population and it included massacres, forced deportations involving death marches (photo below), summary expulsions, arbitrary execution, and the destruction of Christian Orthodox cultural and religious monuments. By the end of the Greco-Turkish War most of the Greeks of Asia Minor had either fled or had been killed. Those remaining were transferred to Greece under the terms of a population exchange agreement, which formalized the exodus and barred the return of the refugees. 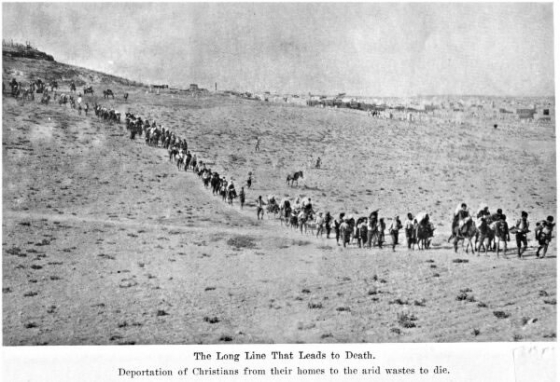 Pontian and Anatolian Greeks were victims of a broader Turkish genocidal project aimed at all Christian minorities in the Ottoman Empire. A total of more than 3.5 million Greeks, Armenians, and Assyrians were killed from roughly 1914 to 1923. Of this, as many as 1.5 million Greeks may have died either from massacre or exposure. About one million had migrated, some voluntarily but most under coercion. Presently, a miniscule Greek population remains in Turkey.

Ancient Historical Context: Pontus is what the Greeks have called the Black sea from times immemorial. The first Greek settlements appeared on its southern coast (modern Turkey and the Caucasus) as early as 800 BC. They were founded by Ionian Greeks, natives of Attica, Anatolia, and the islands of the Aegean. The first city, Sinop, was built in 785 BC. Very soon not only the southern, but also the northern Black sea coast was completely Hellenized. Many renowned Greek men of antiquity, such as Diogenes and Strabo, were born and raised in southern Pontus. In the 4th century BC, an independent Kingdom of Pontus was established on the southern coast of the Black Sea and since that time Pontus began to develop independently from other Greek lands.

Modern Historical Context: The Greeks successfully overthrew centuries of Ottoman rule during the War of Independence from 1821 to 1830, establishing the Modern Greek state as it is currently situated at the tip of the Balkan Peninsula. A “Young Turk” movement emerged aiming to turn the Ottoman Empire (which included Pontus) into a homogenous Turkish nation state. By the beginning of the 20th century, the Ottoman government seriously feared losing its power over Pontus, as it had already with Greece, Serbia, and Bulgaria. “Drastic measures” of extermination of the Greek element were planned by the “Young Turks” whose slogan was “Turkey for the Turks”. In September 1911, the participants of the Young Turks conference in Thessalonica openly discussed the issue of extermination of the ethnic Christian minorities in Turkey, especially Greeks and Armenians.

Beginning in the spring of 1913, the Ottomans implemented a program of expulsions and forcible migrations, focusing in Greeks of the Aegean region and eastern Thrace, whose presence in these areas was deemed a threat to national security. Turkish military units attacked Greek villages forcing their inhabitants to abandon their homes for Greece, being replaced with Muslim refugees. Entering into talks for population exchanges, the Ottoman government adopted a “dual-track mechanism” allowing it to deny responsibility for and prior knowledge of this campaign of intimidation, emptying Christian villages.

In the summer of 1914 the Turkish military, assisted by government and army officials, conscripted Greek men of military age from Thrace and western Anatolia into Labour Battalions in which hundreds of thousands died.  Sent hundreds of miles into the interior of Anatolia, conscripts were employed in road-making, building, tunnel excavating and other field work, Their numbers were heavily reduced through either privations and ill-treatment or by outright massacre by their Ottoman guards. This policy of persecution and ethnic cleansing was expanded to other regions of the Ottoman including Pontus.

Pontian Greeks – women, children, and elderly people – were evicted from their houses in 24 hours, not being allowed to take with them almost anything of their property, and in long columns, under armed convoy, were marched far inland. The deserted villages were plundered and burnt – often before the very eyes of the evicted. On the deportation march, people were treated with utmost cruelty: they did not receive almost any food, were forced to march forward for hours and days on end without rest over the wilderness, under the rain and the snow, so that many of them, unable to endure the hardships, dropped dead from exhaustion and illnesses. The convoy men raped women and young girls, shot people for a slightest reason, and sometimes without a reason at all. Most of the deported died on the way; but even those who survived the deportation march, found themselves in a no better situation – the places of destination turned out to be real “white death” camps. In one of such places, the village of Pirk, the deported inhabitants of the city of Tripoli were kept. According to the reports of the survivals, out of 13,000 Pontians who had been sent to Pirk, only 800 survived.

In his memoirs, the United States ambassador to the Ottoman Empire between 1913 and 1916 wrote “Everywhere the Greeks were gathered in groups and, under the so-called protection of Turkish gendarmes, they were transported, the larger part on foot, into the interior. Just how many were scattered in this fashion is not definitely known, the estimates varying anywhere from 200,000 up to 1,000,000.” German and Austro-Hungarian diplomats have provided evidence for series of systematic massacres and ethnic cleansing of the Greeks. The accounts describe systematic massacres, rapes and burnings of Greek villages, and attribute intent to senior Ottoman officials, including the Ottoman Prime Minister.

At present, the Pontian Genocide is officially recognized only by Greece, Cyprus, Armenia, Sweden, and the American State of New York. This is due to insufficient awareness and, sadly, insufficient interest of the international community. Led by the Greece, the 19th May has been established as Commemoration day of the Pontian Genocide.  Interestingly, in response the Turkish government officials claims that describing the events as genocide is “without any historical basis”.  A Turkish Foreign Ministry statement states: “Greece) in fact has to apologize to the Turkish people for the large-scale destruction and massacres Greece perpetrated in Anatolia, not only sustains the traditional Greek policy of distorting history, but it also displays that the expansionist Greek mentality is still alive.”

Toronto City Council recently passes a Pontian Genocide Motion: That City Council recognize the Pontian Genocide, to honour the memory of the men, women and children who died.  Councillor Jim Karygiannis, who moved the motion said, “It is important to remember these moments in our shared history. We must remember those who suffered and perished. We must teach our children the violence face by their ancestors and others. It is only by remembering and teaching the young that we can ensure that these atrocities never happen again.” (Note that the City of Toronto is the first City to pass such a motion and the Government of Canada has yet to recognize the Pontian Greek Genocide.

This May 19th may we commemorate the Pontian Greek Genocide.