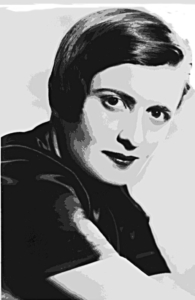 (ed. – Do yourself a favour. Bookmark this page of Ayn Rand musings. When everything seems off-kilter, reread.)