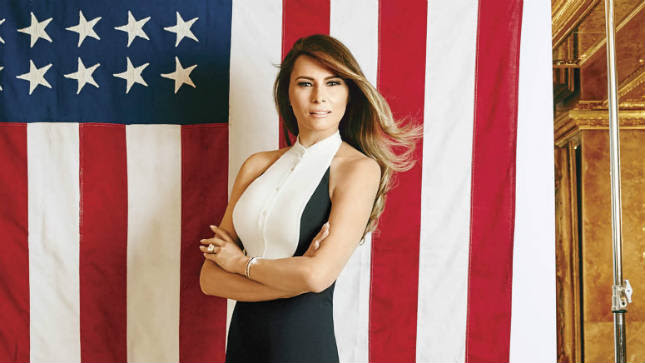 Despite being married to the most controversial presidential candidate in American history, Melania Trump remains an enigma. The mystery that comes with her reserved personality makes Melania an easy target for liberals as articles labeling her as a “mannequin” and condemning her silence are published daily.  Although the famous former model seems to have it all, Melania’s testimony tells the story of someone who’s struggled against all odds – and overcame.

Melania Trump has graced the covers of the most prestigious fashion industry magazines. But like many Americans today, Melania’s success was the result of a courageous work ethic and humble beginnings.

Melanija Knavs was born on April 26, 1970 in the small Slovenian railroad town of Sevnica – long before she changed the spelling of her name to pursue a modeling career.

Despite the struggles many Slovenians faced during the country’s Communist times, the Knavses worked extremely hard to give their children a positive upbringing.

Melania’s mother, Amalija Ulcnik, worked developing patterns at a factory that manufactured children’s clothing. She had met Viktor Knavs in 1966 who worked as a chauffeur for a nearby town’s mayor.  They instilled Melania and her sister with conservative values such as putting family first and having exceptional work ethic.  “I love my childhood. It was a beautiful childhood,” Melania said. Her son, Barron (10), speaks Slovenian fluently and uses it to speak with his grandparents, who now live near the Trumps in New York at Trump Tower.

Melania’s father left his job as a chauffeur to become a salesman at a state-owned car company in Ljubljana, Slovenia and found his family an apartment there – all to provide his children with exceptional education opportunities with their new prestigious address.

Amalija’s career as a seamstress had a profound impact on Melania. Once Melania learned to draw, she would sketch her own designs, and her mother or sister, Ines, would sew them. Melania also made her own jewelry.

Amalija spent evenings after work sewing clothing for herself and her two daughters. Instead of wearing clothes from the store, the Knavses designed and sewed everything they wore. Melania’s childhood friends remember her always being dressed elegantly and carrying herself with confidence – there was always something striking about her.

Melania’s modeling career began when she was 16-years-old at a modeling contest when she attracted the attention of photographer Stane Jerko, whose test photos of the breathtaking teenager resulted in her signing with a modeling agency in Milan.

Despite her success as a model, Melania’s goal was to become a designer. So she applied to the School of Architecture at the University of Ljubljana in Slovenia, becoming one of the few to pass the school’s notoriously difficult entrance exams.

While pursuing her degree in design and architecture, Melania remained focused in school. She didn’t drink, or party, nor did she smoke. Even with the temptations surrounding her as a college student and successful model, Melania lived a quiet homebound life.  “She kept to herself, she was a loner. After a shoot or a catwalk, she went home, not out. She didn’t want to waste time partying,” Jerko remembers.

After obtaining a degree in design and architecture at the University of Ljubljana, Melania was jetting between photo shoots in Paris and Milan – but Melania had even bigger dreams. Melania knew that if she wanted to achieve her goals she would have to move to America.

Melania finally made it to New York in 1996 after landing an American modeling contract – but nothing could prepare for the struggles that were down the road.

Shortly after she began pursuing her modeling dreams in America, Melania struggled to find work because she was considered “too old.” The modeling industry isn’t friendly to models once they hit their later twenties, and at just 26-years-old, Melania was worried her best days were already behind her.  Melania went to castings every day, but photographers continued picking someone else over her, and often someone younger. She was having a difficult time supporting herself, and endured the challenging season while being overseas, away from her tight-knit family back in Slovenia.

Eventually, Melania got her “big break” and it wasn’t long before she graced the magazines covers of Vogue, Harper’s Bazaar, British GQ, In Style, New York Magazine, the Sports Illustrated Swimsuit Issue, Allure, Self, Glamour, Vanity Fair, and Elle.

But nothing could prepare her for the life-changing experience she would eventually encounter during her thriving modeling career…  While at a party during the New York Fashion Week in the fall of 1998, Melania met Donald Trump. She was a tall, shy brunette at just 28-years-old – while Trump was a brash 52-year-old real estate mogul.

“I didn’t know much about Donald Trump,” she says of their first encounter. “I had my life, I had my world. I didn’t follow Donald Trump and what kind of life he had.”

Although Trump attended the party with a date, he was instinctively drawn to Melania. When Trump’s date went to the bathroom, he seized the opportunity to chat for a few minutes with the Slovenian model he’d noticed.

Unlike the women who swooned every time the famous billionaire approached them, Melania remained unimpressed. When Trump asked for her number, she refused and instead asked for HIS contact information – she didn’t want to be just another woman he called, and she waited an entire week before calling him.  Melania was curious to see if Trump would submit a business number. “I wanted to see what his intention is,” she explains. “It tells you a lot from the man what kind of number he gives you. He gave me all of his numbers.”

Melania’s confidence and shocking reaction to the wealthy playboy made Trump even more attracted to her. Trump could tell Melania was beautiful AND intelligent, and he was willing to do whatever it took to win the woman of his dreams. “I’m not star struck,” she explains. “We had a great connection, we had great chemistry, but I was not star struck. And maybe he noticed that.”

Many are quick to criticize Donald and Melania’s marriage due to their age difference, but after learning more about Melania – it’s easy to understand that these two were made for each other. Melania’s reserved personality and traditional values balance Trump’s assertive personality and controversial behavior.

Melania’s traditional values can be seen in her absence from Trump’s campaign trail. Instead of being on the road with her husband, Melania chose to be at home in New York City to raise their 10-year-old son, Barron.

Despite the Trumps’ luxurious lifestyle, Melania refuses to let their son be raised by a nanny.  “It’s my choice not to be there [on the campaign trail],” Melania said. “I support my husband 100 percent, but … we have a 10-year-old son together, Barron, and I’m raising him.  This is the age he needs a parent at home.”

When Donald Trump told his wife he wanted to run for president, Melania said they discussed it in depth and she encouraged him to run.  “I encouraged him because I know what he will do and what he can do for America,” she said. “He loves the American people and he wants to help them.”

Although she’s not out on the campaign trail, Melania stays involved in her husband’s campaign behind-the-scenes.  “She’s told me a couple of times during the debate, she was very happy with my performances, if you would want to call them a performance,” Donald Trump said. “But she said, ‘You could tone it down a little bit on occasion,’ which I understand.”

Melania revealed the biggest untruth about her husband is the perception that he’s “nasty.”  “He’s not,” Melania said. “He has a big heart and [a] very warm heart. You see who he is on the campaign trail all the time and on television, and I think – you know America needs a strong leader and a tough leader and [he] knows what he’s doing.”

“He is who he is,” she says. “Even if you give him advice, he will maybe take it in, but then he will do it the way he wants to do it. You cannot change a person. Let them be. Let them be the way they are.”

Melania’s passion for philanthropy are just a glimpse of the difference she could make as our First Lady. Some of the philanthropic causes she’s been involved with include the Martha Graham Dance Company, the Police Athletic League, the Boys Club of New York, The American Red Cross and Love Our Children USA.

Though she may not have experience in politics, Melania Trump is equipped to help her husband out on the diplomatic front: in addition to her native Slovenian, Melania speaks four other languages: English, French, Serbian and German.

“She’s an incredible mother, she loves her son, Barron, so much. And I have to say, she will make an unbelievable First Lady,” Donald Trump said.

Melania Trump’s life story is a vivid illustration of the American dream. Her humble roots, exceptional work ethic, and devotion to family clearly sets her apart. Melania has made it all the way from Slovenia to the White House… 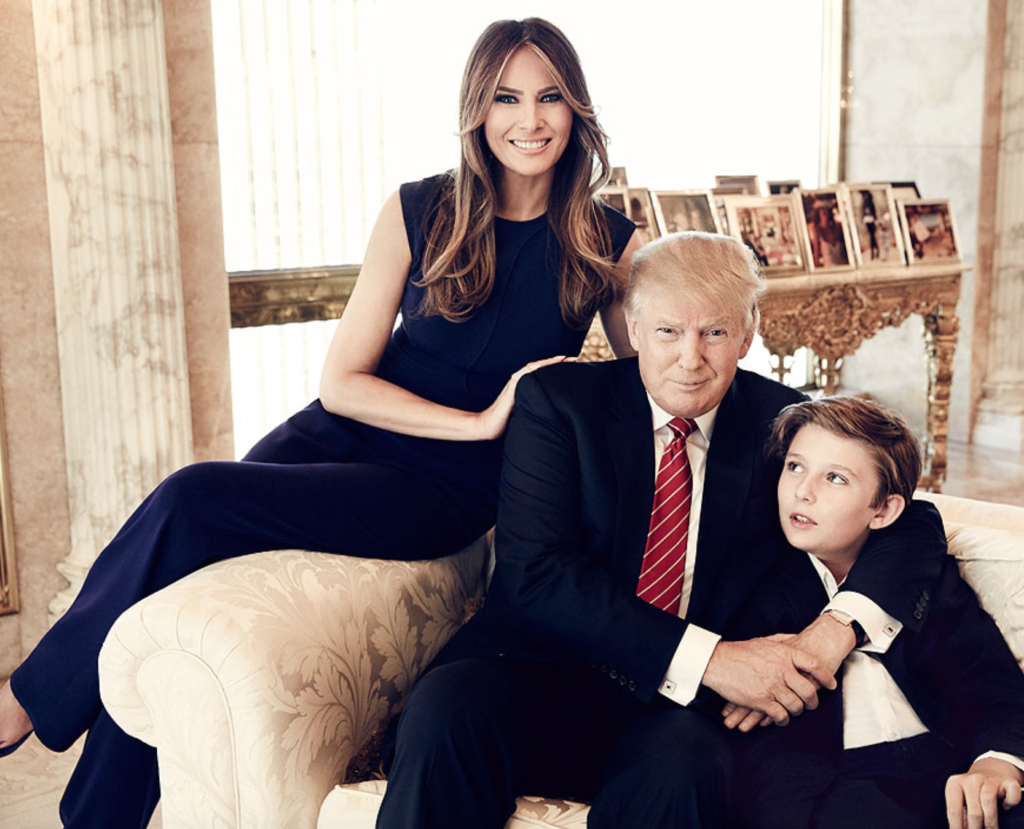 SOURCES:  This article is a compilation of extracts taken from multiple exposes of Melania Trump within mainstream U.S. media through the election cycle.