In a landslide election, Donald J. Trump shocked liberals and republicans alike when he defeated Hillary Clinton in a historic, unprecedented win. And to say that people were astonished at Donald Trump’s victory would be the understatement of the century.  But behind Donald Trump’s victory, stood one woman. So who is this unique lady responsible for helping Trump secure the highest office in the land?

Who is Kellyanne Conway? 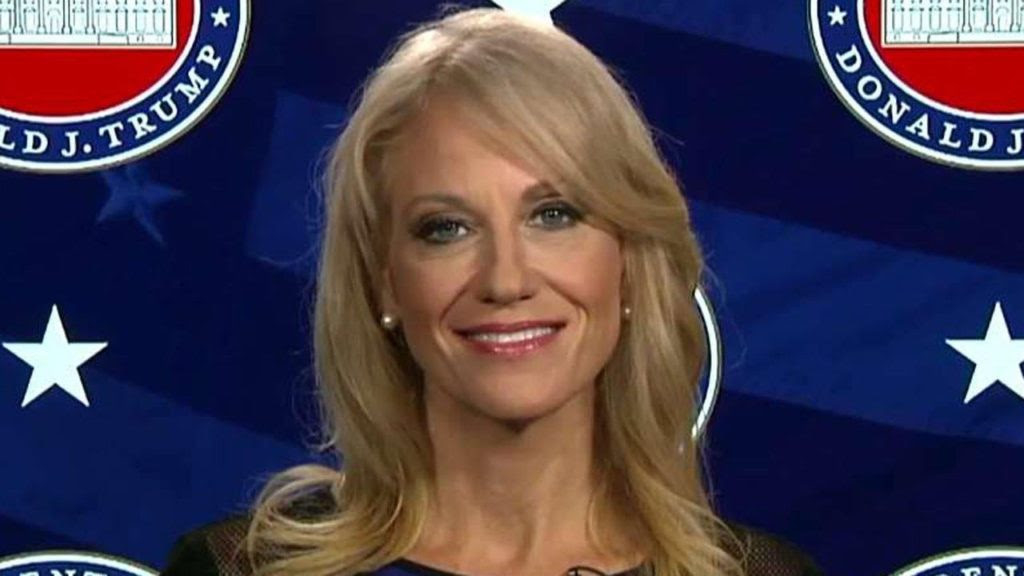 Just weeks after Donald John Trump was elected 45th president of the United States of America, his campaign manager, Kellyanne Conway speaks out about the real reason why he won.

Throughout his campaign, liberals tried to portray Trump as a misogynist. But it is simply incomprehensible to think that a man “with no respect for women” would hire one. It’s a fact that the media has certainly overlooked and attempted to bury.  In the biggest and most critical “job opportunity” of his life, Donald J. Trump entrusted his political campaign– and ultimately, his fate – to a woman. She traveled with Trump throughout his campaign in its last months and advised him, as well as appeared frequently on TV to speak on his behalf.

And now that she’s been appointed counselor to the president, Conway will be the highest ranking woman in the White House.  When asked how she felt about being the first woman to “break the glass ceiling,” Conway responded, “I want everybody to remember, that it was Donald J. Trump who elevated a woman to the highest position in his campaign, much like he has done in the Trump Corporation for a number of decades– it is he who gave women responsibilities.”

Conway considers herself blessed to be given the opportunity. She said, “I’m not a big gender-identity person, and I wasn’t hired for my gender, but it’s . . . a pretty cool thing to say to my three daughters and my son. Many women work really hard and never get their shot. I feel blessed to have gotten my shot.”

As a Republican campaign manager, strategist, and pollster, Conway is the queen of wearing many hats– and she wears them quite well. (It’s no wonder why she’s the first female campaign manager in the history of America to win a presidential campaign.)

Aside from her influence in politics, Conway is also the president and CEO of The Polling Company Inc./Woman Trend. Her company has consulted and conducted market research for some of the leading companies in America such as Major League Baseball, The Federalist Society, Martha Stewart, American Express, and ABC News.

Additionally, Kellyanne has been a guest and political commentator on CNN, Fox News, Fox Business, Real Time with Bill Maher, Meet the Press, Hannity, and more.

Today, Kellyanne Conway is quite successful. But unlike most prominent women in politics, she wasn’t born into a successful family, and her childhood was almost anything but glamorous.

Kellyanne Elizabeth (Fitzpatrick) Conway was born on January 20, 1967, in an impoverished little neighborhood just outside of Camden, New Jersey. Conway’s parents led a very simple lifestyle; her Irish father owned a small trucking company while her Italian mother worked at a bank.

When she was only three years old, Conway’s parents divorced. And from an early age, Kellyanne witnessed first-hand what hard working women looked like. Young Conway was raised by her single mother, Diane Fitzpatrick, as well as her grandmother and two aunts– who all worked tirelessly to help make ends meet.

Conway traces her conservative world-view to growing up in a household, “where family and faith and self-reliance were premier. We were not encouraged or allowed to complain or talk about what we didn’t have.”

It wasn’t long before Kellyanne acquired a job herself. For eight summers throughout her schooling years, the bright-eyed and blonde young Kellyanne worked grueling hours of manual labor as a blueberry picker on a farm in Hammonton, New Jersey. And to this day, she credits her fighter spirit and strong work ethic to that farm.  Conway said, “The faster you went, the more money you’d make. Everything I learned about life and business started on that farm.”

At age 16 Kellyanne won the New Jersey Blueberry Princess pageant. And at 20, her hard work and determination helped her win the World Champion Blueberry Packing competition!

Early on in her career, Conway appeared on TV frequently throughout the ’90s to take a stand against the Clintons. Since then, the brilliant and outspoken republican has provided commentary on more than 1,500 TV shows.

Throughout her schooling, Kellyanne planned to establish herself as a lawyer, but God had other plans for her life. The half-Irish, half-Italian young lawyer soon found her professional niche in 1988, while working for Ronald Reagan’s pollster, Dick Wirthlin, in the summer before she graduated from George Washington University Law School. Her first assignment was to demystify the gender voting gap: “How could the GOP attract more women?”

Kellyanne had discovered her purpose. Seven years after that life-changing assignment, Conway founded The Polling Company/WomanTrend, a consulting firm that specializes in market research. A decade later, she co-authored a book titled “What Women Really Want: How American Women Are Quietly Erasing Political, Racial, Class, and Religious Lines to Change the Way We Live.”

Raised by four women, ironically, Conway chose to work in what she calls a man’s world — especially as a Republican political pollster.  Conway told CNN, “Republican politics can sometimes feel like you’re walking into, you know, an Elks Club or bachelor party.” She recalled a potential client — a man — asking how she’d balance kids and work. “It’s like, ‘I just hope you ask all the male consultants. Are you going to give up your weekly golf game and your mistresses?’ Because they seem really, really busy too,’” recalled Conway.

But in that “world full of men,” Kellyanne shines. For decades, she has provided a steadfast, fearless, and persistent conservative voice for republicans across our nation. Conway is a long-time pro-life activist, Second Amendment supporter, she stands with Israel, and she boldly defends the Biblical definition of marriage every opportunity she gets.

Pro-life activist Kristan Hawkins, president of Students for Life, talked to The Stream about Conway. “Kellyanne was already a star in her own capacity before she led Donald Trump’s campaign victory,” Hawkins said. “Her broad knowledge of key issues that matter to conservatives was well-established, especially in regards to abortion, conscience rights and religious freedom. Her presence in the White House should be not only a source of comfort to those of us who have worked with Kellyanne for years, but also a source of pride and encouragement. Kellyanne is one of us, a respected leader in the pro-life movement who helped guide organizations with key messaging and wisdom many times over. President-Elect Trump is wise to keep Kellyanne by his side as he takes the oath of the 45th President of the United States.”

Trump and Conway’s paths crossed by divine intervention — and little did they know they would eventually work together to Make America Great Again.  Conway met Trump in 2006, when she was living in one of his buildings – she served on the condo board of the Trump World Tower in Manhattan. Conway recalled being surprised to find how involved Trump was– even showing up to meetings to hear residents’ concerns. Over the following couple of years, Trump would call her to say he’d seen her on TV and ask her opinion about varying issues.

In March 2015, Trump asked Conway to help strategize for his presidential bid and even offered her a job on the campaign, but she declined. Over a year later, on Aug. 17, 2016, Conway accepted the role as his campaign manager — a decision that would alter the course of their lives, and history, forever.

“Kellyanne Conway has been a trusted advisor and strategist who played a crucial role in my victory. She is a tireless and tenacious advocate of my agenda and has amazing insights on how to effectively communicate our message. I am pleased that she will be part of my senior team in the West Wing,” stated President Trump in a written release. 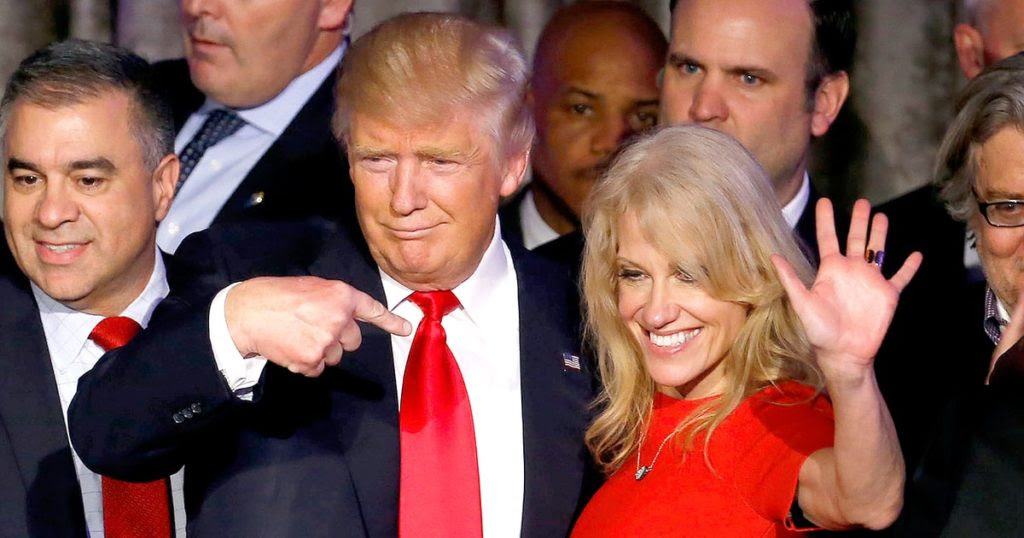 But there’s much more to Kellyanne than just politics. Conway is an outspoken woman of faith, devoted wife, and proud mother of four. Kellyanne’s husband is George T. Conway III, who as a young lawyer played a historic—and largely hidden— role in the impeachment of Bill Clinton.

Kellyanne believes meeting her hubby George was by Divine appointment. According to The New Yorker, their romance began after Conway saw a picture of Kellyanne on the cover of a Washington society magazine and asked a mutual friend to set them up.  The lovebirds met the following year, and tied the knot in 2001, when Kellyanne was 37-years-old. Together, the Conway’s have four children — including twins– between the ages of six and eleven.

Conway recalls the joys of being a pregnant middle-aged woman, “I had my first children [twins] at thirty-seven, then I had two daughters in my forties, forty-one and almost forty-three,” she said. “They say there are no eggs left in your forties, but there were two rolling around in there somewhere. I was surprised both times, like, ‘Oh! O.K. Not a stomach ache.’ ”

And despite her hectic career, Conway considers her family her greatest priority on this side of eternity. And like all working mothers, time with her children is precious.

The Conway’s have made their home in Alpine, New Jersey and have no desire to be in the limelight. In fact, they’re rarely seen in public.

“I want all the little girls out there to know that the lessons are very simple. Be kind your entire life because all the kindness I showed to other people came back to me manifold in this campaign. And secondly and most importantly, if you work hard and you get your shot one day, you too will shine. You have to believe in yourself, don’t listen to the critics, don’t listen to the naysayers. You know who you are. You’re beautiful, you’re smart, you can do it. That’s my message to all those little girls dreaming out there.” – Kellyanne Conway

SOURCES:  This article is a compilation of extracts taken from multiple exposes of Kellyanne Conway within mainstream U.S. media through the election cycle.