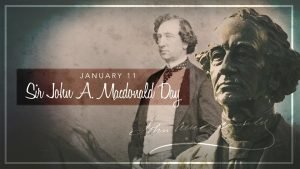 In 2015, to mark the 200th anniversary of the birth of Sir John A., Canadian Prime Minister Stephen Harper wrote a tribute commemorating Canada’s first PM.

Here is a gem of an exchange in Maclean’s: A toast to Sir John A., Canada’s controversial nation builder — An hour long discussion of the legacy of John A. Macdonald, whose 200th birthday falls on Jan. 11

Maclean’s convened a gathering of three John A. aficionados: Richard Gwyn, the journalist and author who wrote The Man Who Made Us and Nation Maker, a two-volume biography of Macdonald; Patrice Dutil, a professor at Ryerson University and co-editor of Macdonald at 200: New Reflections and Legacies, a collection of essays on Macdonald’s influence; and Jane Hilderman, research manager and acting director at Samara, an advocacy group dedicated to improving citizen engagement and public life, and a member of Toronto’s Friends of Sir John A. Macdonald organization.

What should we be celebrating this January when we talk about Sir John A.?

Here is a very humourous article that is sure to delight…. No Grumpy Old Man by Peter Shawn Taylor

The humourless political landscape we call Canada was not always this way. Our founding Conservative Prime Minister Sir John A. Macdonald, who was roundly pilloried in the media as a drunk and a racist on the occasion of his 200th birthday earlier this year, was also the funniest politician our country has ever known. Despite a life marred by personal tragedies, Macdonald remained a razor-sharp wit and irrepressible jokester throughout his career. Peter Shawn Taylor has assembled a hilarious assortment of his greatest puns, putdowns, and pranks.

There seems no risk Macdonald will ever cede his crown as Canada’s funniest prime minister… Macdonald’s boisterous and unstoppable sense of humour would surely find its way to the surface.

Gainsford recollections of his mother’s stories: My Mother Knew John A. Macdonald

Hugh Gainsford, a retired Manitoba public servant and great-grandson of our founding prime minister, died November 25, 2014 at age 96. His mother Daisy, John A. Macdonald’s granddaughter, was the last person to have known the Father of Confederation when she passed away in Winnipeg in 1959. Gainsford gave his last interview to Blacklock’s publisher Holly Doan on May 17, 2004. Following is a transcript of his reminiscences)

Today’s controversies about Sir John A. Macdonald are overshadowing his tremendous achievements and here are some observations that help to put into context the lessons Canadians can learn from studying the life and times of the country’s first PM.

In a National Post article noting the significance of this day respected political observer and author Bob Plamondon makes the perceptive comment:

Macdonald’s greatest gift to us, then as now, was to show us how we can be stronger as a nation when we celebrate and respect our diversity. Through his vision and example Macdonald remains as relevant to Canadian unity today as he was at the most crucial moment of our history.

Barbara Messamore: Sir John A. wasn’t perfect but he chose to act, dared to err

Plenty of problems in our own time require bold solutions; let’s not teach our students to take the way of caution

Conrad Black: There’s much to celebrate in Sir John A. Macdonald’s legacy

Macdonald ended Canada’s colonial status and was the benign and democratically elevated patriarch of the country he chiefly founded, including all of its races and ethnicities

Pierre Anctil: The end of heroes: John A. Macdonald and the fate of his successors

Pierre Anctil is an author and professor of history at the University of Ottawa and he writes:

Macdonald’s career evolved in a social and cultural environment that is radically different from the one that we now live in and comparisons are extremely difficult…. Undeniably, Macdonald was a key historical figure of nineteenth century Canada. He put in place measures and political notions that are still with us today and that define our Canadian identity; the most important of which is the imprint he left on the signing of Confederation in 1867 and the expansion to the West.

There is a grave danger in measuring Macdonald’s record against today’s standards. If that practice continues, the fate of his statues in 2020 will be visited upon all his successors.