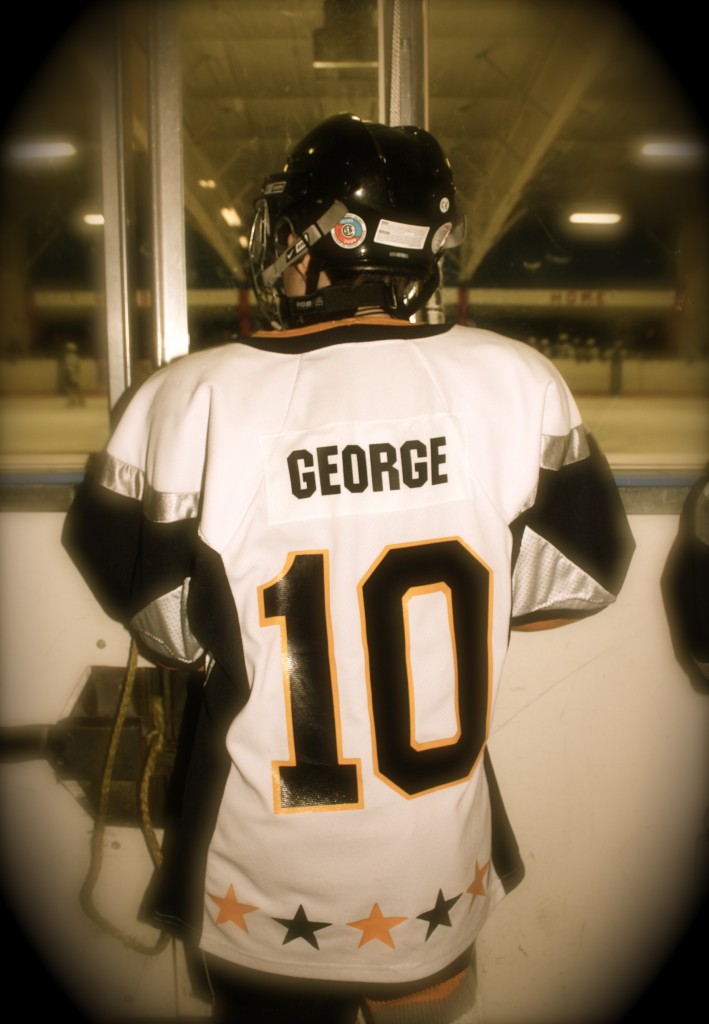 The 2010-2011 hockey season for the George boys has officially ended. And admittedly, this week we have all been living in denial… we still hold out hope that, just maybe, in the days ahead we’ll see the inside of a rink again. Maybe the boys will get a chance to lace up…

The photo is of my eldest, moments before he took to the ice for the championship game of tournament play in Buffalo last weekend. The game was invigorating – the players on both teams laying it all out on the ice, every shift, every play. The contest ended with a sinking wrist shot that eluded the goalie’s glove hand, 5 minutes into an overtime period. Though the St. Catherines Stars were on the losing end of the 3-2 score, everyone in that arena that afternoon left fulfilled. It was ahelluva game – some fine hockey.

It wasn’t so bad to be defeated, as it was us knowing that this game was to be the last of the season.

Somewhere I remember reading that life imitates sport. Sunday, we experienced life again with the rushes, passes, and exciting plays in front of the nets. There were many tense moments (who’s kidding who – it was all tense!!) and we yelled at the poor refereeing, cheered on our boys and clapped for the energy and skill displayed by both teams. This game was the best of the sport we all have become so intimate with.  For 90 minutes on Sunday, nothing else really mattered once the whistle blew and the puck dropped.

As we were driving home, Alexander said, over and over, “I can’t believe hockey is over. It was such an awesome year, why does it have to end?” Of course, our parental instincts told us to say – “All good things must come to an end.” Yet, in attempting to respond to his moans from the backseat, my wife and I could only offer a few unconvincing words of comfort. It was all too recent and hard to put into perspective and, yes, we were thinking what Alexander was voicing.

Later that night, my younger boy – a spirited player himself – asked about the next time he would get onto the ice. He talked about looking forward to power skating in September and the try outs for the Select team. He wondered about the new equipment he was going to need and how much he would grow in the summer. He spoke of how much he loved the game and how he wanted to improve his play. Then David questioned me on the number of weeks he’d have to wait before the start of the 2011-12 house league season – and we worked it out to be 20 weeks. Somehow, counting through those weeks in our heads made us realize that the new season is really not too far off.

I find that, by talking about next season, it is helping us to re-focus on other thoughts of spring, summer and family vacations. With that last game in Buffalo so freshly imprinted in our memory, anticipation for “the next time” may be paining, yet it is beginning to feel bearable. It’s 20 weeks; it’s just 20 weeks. What are we suppose to do? It’s life! And we take comfort in knowing that the puck will drop again (in 20 weeks and counting).

(ed. – This column originally appeared in the By George Journal in April 2011.)