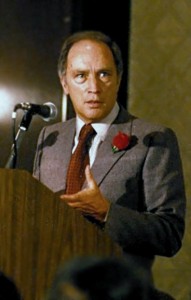 “I walked until midnight in the storm, then I went home and took a sauna for an hour and a half. It was all clear. I listened to my heart and saw if there were any signs of my destiny in the sky, and there were none — there were just snowflakes.”

It has been thirty years this week since Prime Minister Pierre Trudeau took that “long walk in the snow” and decided to retire from Parliament Hill (and what all Canadians thought was public life). He is a man who has cast a long shadow on our country. This week By George provides some perspective on our former Prime Minister.

Here are some of P.E.T.’s infamous musings while in office:

(ed. – This compilation of quotes first appeared in the By George Journal post of June 2010. Source for the photo:  http://en.wikipedia.org/wiki/File:Pierre_Elliot_Trudeau-2.jpg )