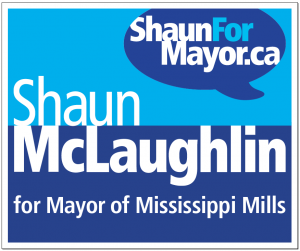 This past Spring a friend of 20 years approach me to manage his mayoralty bid in the community our Family had just chosen as home. For a good part of 15 years, I have steered clear of a managerial role in a political campaign; but this time there seemed to be every good reason to get involved. I said “yes” on that May afternoon to Shaun McLaughlin and I am very glad I have become re-engaged in the business of political campaigning.

There were two important points that piqued my interest in the campaign for the helm of our Town. First, the residents of Almonte are seized in a dispute over a local developer’s attempt to enlarge his power generation plant; a project that will forever alter the landscape of the quaint, touristy heart of the downtown. What is at stake is the growing business communities that feature the arts, culture and heritage of this traditional, Lanark small town. The new power plant will change the view along the river (and likely erect danger signs and tow ropes), restrict access to fishers, boaters and swimmers, possibly cancel out the use of the old railway bridge for a multi-use pathway, and, most important, contribute to lasting ecological damage to the river lands. This construction project was blessed by the current “let’s-develop-at-any-cost” Mayor, who tried to hoodwink the community to believing the development was a fait accompli and maintains that it is a good thing without providing any evidence of how its benefits to the Town. This development is a major concern for many folk who have been belittled and outright dismissed by the Mayor. So, for us, it is high time to dismiss this Mayor.

The second reason I jumped into the fray of local politics is the chance to help a friend, Shaun McLaughlin. Shaun is a quality candidate and someone who can be trusted not to allow such a development project to run amuck of the desires and vision of Almonte residents. Shaun is currently a Town Councillor and has proven to be a thoughtful, conscientious representative. He has the ability to lead through building consensus and is intent on opening up Town Hall to give more people the opportunity to shape the Town we live in. I like Shaun’s collaborative approach and his skill at reaching working solutions. I could not think of a better mix of talents I would like to have as the Mayor of our community.

For me, personally, it’s time to get back involved in political campaign organization and management. I have always believed our democracy works directly because of the participation of its citizens. Since I was a teen, I have been involved in elections and for years I worked within the political system. Through the years, I have been in positions of responsibility in more than three dozen campaigns, in the managerial role in elections at every level of government. Though campaign mechanics have changed dramatically in the last 25 years, the core job of connecting with people and properly communicating campaign theme and messages to the electorate has remained unchanged. I have always enjoyed working alongside engaging and committed individuals – the large majority of people who volunteer for political campaigns do so sharing a common desire to make our community a better place to live.

I am very happy to have scratched my political itch and become reengaged in the political process by doing something I really do love – managing a campaign. It will be particularly pleasing to impact change at our local level, save our river and quaint Town, and the possibilities and dreams of our community.

Visit ShaunForMayor.ca to learn more about Shaun and the mayoralty campaign.