“Never doubt that a small group of thoughtful, committed citizens can change the world; indeed, it’s the only thing that ever has.” – Margaret Mead

Many readers of this Journal will know that Chris George has been preoccupied over the last number of months with managing Shaun McLaughlin’s campaign for mayor of Mississippi Mills. Read “About Shaun.”

On Monday night, when the votes were all in and counted, it was one-term Councillor McLaughlin, who beat out both the veteran politician and incumbent Mayor and another popular Councillor, the dean of the Council. Click here to see the official results.

It was a great election (although heated and at times nasty) and a wonderful campaign for the many volunteers who helped Shaun along the way. For more information on the Mayor-elect, take a look through his website: ShaunForMayor.ca . He has posted a great collection of “campaign memories.”

Shaun made four main commitments through the election, including to the promise that growth and development in the community would take into account the shared values and heritage of the Town. Most importantly, he spoke out against a very unpopular hydro generating project that would have a hugely negative impact on the heart of the downtown – the beautiful river walk. Read Shaun’s statement on the Enerdu project and what he has promised to do about the development. 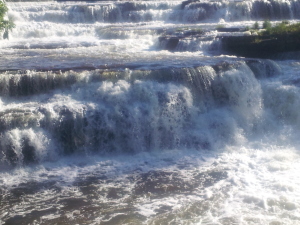 So, the election was a victory for Shaun, a victory for those folks who love the Town’s potential as a quaint, tourist mecca and a beautiful, heritage and nature wonderland. There is great hope and confidence riding on Mayor Shaun McLaughlin and his mandate. Here’s to four important years in the evolution of our Town!

Read some media accounts of the election results – from the Inside Ottawa Valley News and Mississippi Mills’ own on-line news source, the Millstone.