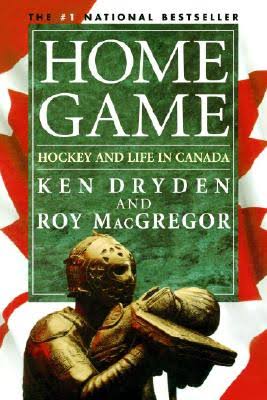 In their best-selling book Home Game, writer Roy MacGregor and goaltender great Ken Dryden comment on the bonds of our quintessentially Canadian game. It’s a superb introspective of what is central in our Nation’s pysche!

Here are a few snippets from the introduction and the book’s first chapter entitled, “The Common Passon”:

“Hockey is part of life in Canada. Thousands play it. Millions follow it, and millions more surely try their best to ignore it altogether…. Hockey is pat sport and recreation, part entertainment, part business, part-community builder, social connector, and fantasy-maker….

“It is is Canada’s game. It may also be Canada’s national theatre. On its frozen stage, each night the stuff of life is played out: ambition, hope, pride, fear, love and friendship, the fight for honour for city, team, each other, and themselves. The puck flips one way, bounces another, and the players set out to control and direct it. It takes them where they never planned to go. It tests them. And in struggling to get it back, with the millions who watch it in the arena or by television, the players find out who they really are. Like the bear pits in Shakespeare’s time, we attend hockey games as our national theatre. It is a place where the monumental themes of Canadian life are played out – English and French, East and West, Canada and the U.S., Canada and the world, the timeless tensions of commerce and culture, our struggle to survive and civilize winter….

Home Game is a must-read book for anyone wanting to understand the inextricable links between Canadians and our National game.