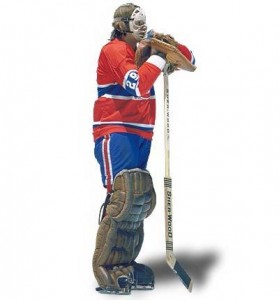 Since the holidays I had the pleasure of re-reading one of the very finest books ever written about the game of hockey – The Game, written back in 1983 by the storied Montreal Canadian’s goaltender Ken Dryden.

The subtitle to this book is A Thoughtful and Provocative Look at a Life in Hockey – and, page after page, with each commentary and detailed description, this book is both insightful and informative!

It is a must-read for any avid hockey fan and a book recommended to anyone trying to grasp the significance of this sport to the boys and men (and many girls and women!) of this country.

To give one example of the depth of insight imparted, here is Dryden’s explanation of how hockey is a transition game, not a possession game.

Possession was what they [the Russians in 1972] were supposed to be about: passing, team play, always search for the open man, regrouping to start again if their possession seemed threatened. But a puck cannot be physically carried up the ice like a football; and a hockey player is not protected from physical battering as a basketball player is. He can be overpowered, the puck can be wrested from his stick by one or two or more opponents, with little recourse except to pass it on to someone else soon harassed the same way. A possession game is hyperbole. The puck changes teams more than 6 times a minute, more than 120 times a period, more than 400 times a game, and little can be done to prevent it. And when it is not changing possession, the puck is often out of possession, fought after, in no one’s control. It is sustained possession only on power plays. There is possession involving several seconds at other times only when a team regroups to its own zone to set up a play. If possession is team style, it will be frustrated. Worse, if it is attempted, it will make a game cautious and predictable.

Instead, hockey is a transition game, offense to defense, defense to offense, one team to another. Hundreds of tiny fragments of action, some leading somewhere, most going nowhere. Only one thing is clear. A fragmented game must be played in fragments. Grand designs do not work. Offenses regrouping, setting up, meet defenses which have done the same, and lose. But before offense turns to defense, or defense to offense, there is a moment of disequilibrium when a defense is vulnerable, when a game’s sudden, unexpected swings can be turned to advantage. It is what you do at this moment, when possession changes, that makes the difference. How fast you can set up. How fast you strike. What instant patterns you can create. How you can turn simple advantage into something permanent… 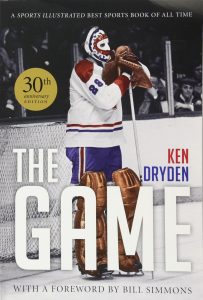 The Game is a provocative book and an exciting read — and deserves to be read and re-read every few years!