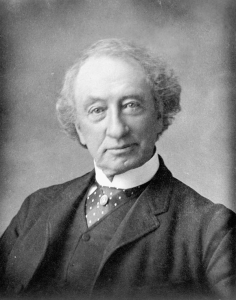 This January 11, 2015 marks a special anniversary for our country: the 200th birthday of Sir John A. Macdonald, Canada’s first Prime Minister.

Since 2002, this day is set aside for Canadians to remember their first Prime Minister, one of the Fathers of Confederation. So it is fitting to that we take this occasion to highlight a few interesting facts and celebrate the man.

Through the years, By George has lamented the ignored legacy of Sir John A in many of our posts (and we have tagged “John A. Macdonald“). We have compiled lists of his quotes and a few years back featured our 10 favourite quotes.

To mark the 200th anniversary of the birth of Sir John A., Prime Minister Stephen Harper wrote a stirring piece that commemorates our first PM. PM Harper writes:

In a National Post article noting the significance of this day, Bob Plamondon, respected political observer and author, makes the perceptive comment:
Macdonald’s greatest gift to us, then as now, was to show us how we can be stronger as a nation when we celebrate and respect our diversity.

All of this is by way of hanging our collective heads with the discouraging fact that Canadians really do not know enough about Macdonald and his legacy. On Canada.com, there is a telling release this week: Poll conducted ahead of the 200th anniversary of Macdonald’s birth

One in four Canadians can’t identify Sir John A. Macdonald as the first prime minister of Canada, according to a new poll commissioned by Historica Canada.

So, today, take a moment and share a story or two about our first Prime Minister. Talk about him. Toast his legacy. Canada is very much a living testament to Sir John A. Macdonald’s vision and efforts. It is so important that more Canadians appreciate this fact.