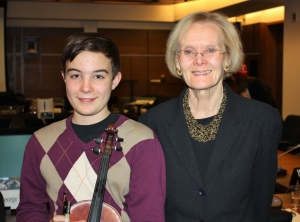 Yesterday at the Canadian Heritage Committee, Members of Parliament were discussing the establishment of a day in Canada to recognize fiddle music. Appearing before the committee was Senator Elizabeth Hubley who is the author of Bill S-218, An Act respecting National Fiddling Day. There was also Graham Sheppard, Vice-President of the Canadian Grand Masters Fiddling Association, fiddler extraordinaire Kelli Trottier – and a young Ottawa Valley fiddler by the name of Alexander George.

Witnesses provided their testimony and Kelli and Alexander had the chance to play for the MPs. Senator Hubley provided an eloquent argument for a National Fiddling Day; a special day that would provide an opportunity for the music community and for Canadians across our country to come together to celebrate Canada’s diversities as found in the rich history of fiddle music. The Senator likened the spirit of fiddle music to the very character of Canada.

I am convinced that fiddling is the perfect metaphor for Canada.

Like Canada, it has deep classical roots but is strong and confident enough to allow for many regional differences and nuances that give rise to a beautiful, harmonic unity.

Like Canada, it is a study in contrast. It is modest, yet it is extremely complex, accessible in terms of availability and affordability yet difficult to master, as any player will attest.

Like Canada, it embraces and accommodates many different styles and traditions, allowing each to thrive and flourish even while we create an entirely new sound.

As for 14-year old Alexander, he shared with MPs his experience and passion for fiddle music. As he said: Fiddlers are part of a sharing community that has a proud tradition of coming together to play and entertain. I really can’t explain it, but fiddling is a great feeling – playing with fellow musicians and seeing the smiles on peoples’ faces. I am very happy to be part of Canada’s fiddle community.

The Canadian Heritage Committee proceeded to clause-by-clause of Bill S-218 and the MPs passed the legislation. It will be reported back into the House of Commons and proceed to a third reading in the weeks to come. 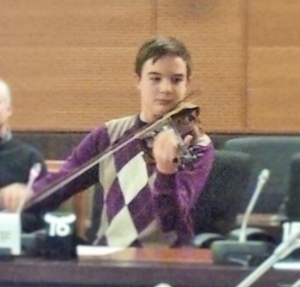 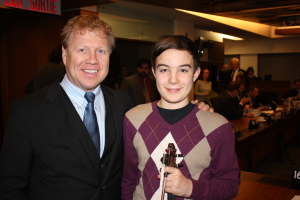 1 thought on “Towards a National Fiddling Day”