A recent article in The Objective Standard quotes the President of the United States making the following observation about taxes:

“Taxes take from everyone a part of his earnings and force everyone to work for a certain part of his time for the government. . . . I want the people of America to be able to work less for the government—and more for themselves. I want them to have the rewards of their own industry. This is the chief meaning of freedom. Until we can reestablish a condition under which the earnings of the people can be kept by the people, we are bound to suffer a very severe and distinct curtailment of our liberty.”

The magazine then states that “obviously those are not the words of Barack Obama, from whom such a statement would be unthinkable.  Although Obama may cite “middle class tax cuts,” he does not seek to cut taxes. President Obama seeks to merely to prevent certain taxes from increasing.”

And, as the editorial points out: “In today’s absurd political lingo, the lack of a tax hike is a “tax cut.””

So, who made the priceless observation above? These words are from former U.S. President Calvin Coolidge in the year 1924. In his speech, President Coolidge pointed out the insanity of class-envy taxes that punish the most successful Americans: “The wage earner . . . makes his contribution, perhaps not directly but indirectly, in the advanced cost of everything he buys. The expenses of government reach everybody.”

The Objective Standard editorial takes the current President to task:  “Obama’s tax-and-spend policies constitute “a very severe and distinct curtailment of our liberty.” It is time for Americans who care about their liberties to recognize that fact, to state it openly, and to advocate their right to the “rewards of their own industry.”

This American commentary applies directly to a few governments north of the border – Ontario’s provincial government the prime culprit of overspending and unconscionable taxation in our country. (ed. – Next week By George will look at the tax-and-spend-and-spend-and-tax-some-more Ontario Liberals and inspect what impact this government may have on the 2015 election.) 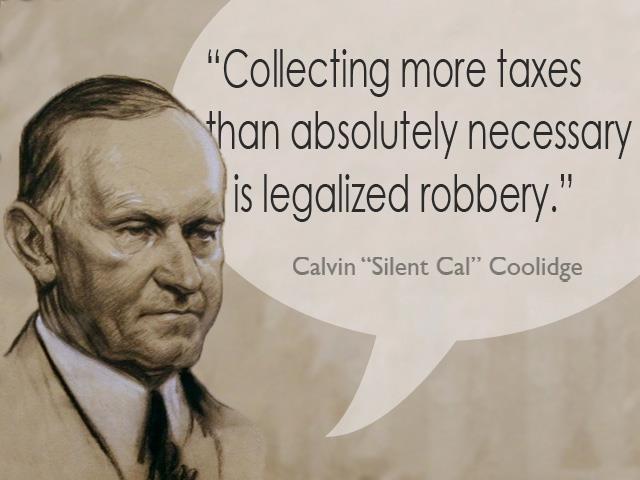